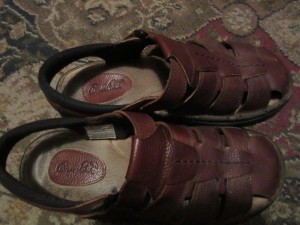 (the long reach of Arnie’s endorsements: my Sears sandals) 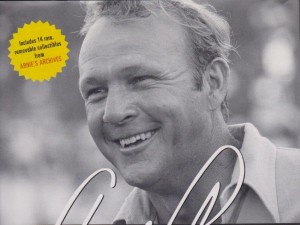 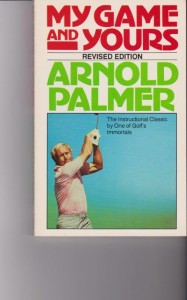 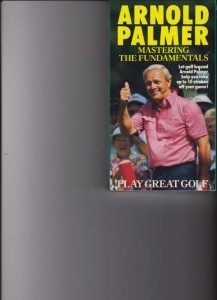 An uncracked oldie VHS I will open and watch today in memory and appreciation of my favorite golfer of all time.

He was The Giant of the game despite whatever claims for Jack Nicklaus and Tiger Woods. Arnie was the first superstar golfer via television. He was the golfer everyone wanted to see and be in the late fifties and sixties.

What I liked about him was his sunny, friendly personality, his success despite his unorthodox swing, and the many risks he took to win (c.f. Phil Mickelson and Bubba Watson re. the latter today).

Palmer fueled my interest in golf. When I was 10, I ordered his golf tips series pamphlets from the local newspaper, and my game was subsequently mentored by him. Later, when he became an endorser of a Sears clothing brand, I ‘bought in’ several times because of the name, who he was, and the glorious golf memories he conjured.. Over the years I have owned and worn many Palmer shirts and still have a couple in my closet and a nice pair of sandals. (I think the only other media personality who’s interested me that much long-term has been Mickey Mouse; I’ve bought several watches, 2 Fantasia boxsets and poster.)

The Mouse, of course, never dies, and so, too, will the memory of Arnie and all he did, eventually owning a Golf Channel all his own in later life. Yes, Arnie was a legend, a charming cultural hero, and a great golfer. He went the distance and then some. I will be one of many millions to miss him.