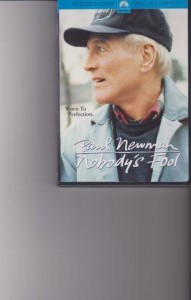 Paul Newman’s and Jessica Tandy’s last strong roles. (Both she and Newman were undeservedly robbed of Oscars again. Newman did, though, garner 3 critics’ awards.) Newman plays a working class stiff in a small New England town made up of ordinary, unglamorous folk who all have relationships with him of varying kinds. Tandy plays his aging landlady who loves him in spite of his bad behaviors, including his staunch refusal to have tea with her.

Bruce Willis, in an unbilled cameo, plays Sully’s arch nemesis-boss who enjoys their feud and always outwits him. Melanie Griffith plays the boss’s wife who is fed up enough with her husband’s bimbo-philandering (even when she’s pregnant) and offers to escape with Sully by flying to Hawaii. All the other characters–his not-all-there-best friend, the one-legged Jewish lawyer, Sully’s son, his grandsons, the daughter-in-law, Sully’s ex-wife and her husband, the town crazy woman, the cop who has it in for Sully, the female bartender–are well cast and very believable and likable in their own ways.

All of this is a credit to the writer and director Robert Benton, best-known for his Oscar-wnning work on Kramer vs. Kramer. In another’s hands, this film would have been overly-schlocky, over-the-top coarse, obvious, and unnuanced. John Bailey’s cinematography and Howard Shore’s music enhance the implicit underlying poignancy and limited lives of the protagonist and others in this town. Nobody’s Fool is a genuinely pleasant, very impressive, understated ‘little film’ that has a ton of playfulness and charm despite the ordinariness of the characters and their somewhat limited small-town lives and dreams. Highly recommended for viewing and/or purchase.