The Legend of Fudge 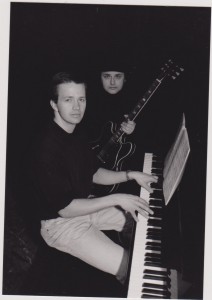 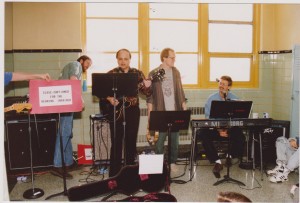 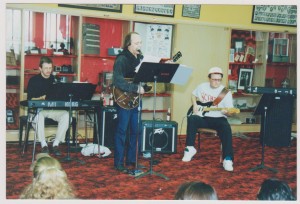 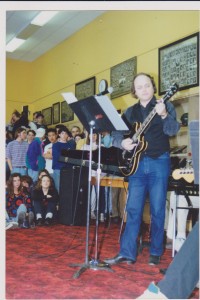 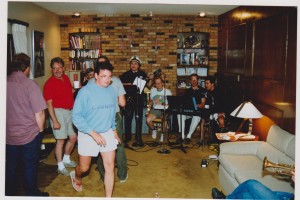 Fudge was born in 1990 A.D. at Strathcona High In Edmonton. I’d played solo and with several groups from 1967 to 1975, and had put on teacher musical acts from 1972 to 1989, but Fudge was something different with a fairly regular core of myself (rhythm guitar, vocals), my percussion machine (SR-16 which had a phantom supporting illusion of bass sound) Ken Klause (piano, vocals), and later Ken Kulka (lead guitar). Klause, SR-16, and I were the first pieces of the aggregate. We were quickly doing songwriting and giving impromptu performances, initially, in the Scona hallway, later in the Scona Room, and gym–eventually branching out to Strathcona cafes such as Café le Gare and the Blue Nile (where we did love-themed readings and performances), and later the Scona stags, staff house parties, and the 2003 grad–the last K-K-R gig.

Thousands of kids, staff, and the local artsy public enjoyed the various shows. Klause and I briefly considered doing a lounge act (which would have worked–I’d done that kind of extra-curricular work before, but did not miss the smoke and drunks) which, in any case, led to some potential publicity photos (top left).

The Fudge hallway concerts (top right), beginning in 1990, were wild and fun with kids sitting or standing around. They were impressed by some of the hipness of our choices (“Light My Fire”, “Takin’ Care of Business”,”Tears in Heaven”, “Sultans of Swing” with letter-perfect guitar by Kulka) and the K-K-R trio soon packed the Scona Room–middle pictures– (with photo coverage, twice, by the Edmonton Examiner). *The sign, incidentally, was a leftover prop from my August Company production of 60 Minutes Live from Loon River! , performed at the 1989 Fringe Festival.

It was often hard to ‘come down’ after a noonhour or morning breakfast show at the school, to switch gears and teach! We generally did at least one student show per year for 13 years. As has often been remarked, teachers then had a lot more fun and autonomy, and enhanced the learning, spirits, and morale of everyone who worked those special years at Scona. To wit, the last picture which is from a Scona stag, a wonderful, noble, spirited tradition which had a long, good run, and in which Fudge played a prominent role in the later years.

There are many stories (the origin of the group name, who was the real Fudge), songs, souvenir t-shirts, wild live show cassette recordings, and a zillion happy musical times associated with this band. But the above will be enough to positively affect the quality of a Friday the 13th blizzard in frozen north Edmo. Yes, it was all about the shared, mutual gifts of self and music’s possibilities via live musical performances once upon a time….