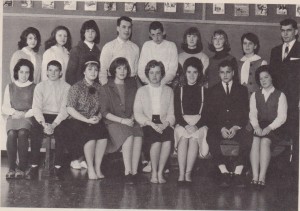 (gr. 9–author as ‘cool chick magnet’; note: fashionable white Ivy League socks, ‘Beatles’ black jacket, slim tie, shirt collar was likely a bar collar–I knew no other students who wore one. Hair styles were still short until next year when kids started to push the high- school-rules envelope. Seated with me are the yearbook staff. Leslie Smith with the risque suspenders skirt beside me–in  May 2012, we reconnected in person at the school’s centenary, which I was the main speaker at; she went into nursing, me teaching. We both kept our senses of humor.)

An only child, I had travelled through school pretty much in my own haphazard, learn-as-you-go way. There were definite limits and limitations showing, despite a burgeoning love of pop music and an interest in romance.

My oldest childhood friend, who took the road not taken, and changed schools in grade 3 thereabouts, had gone on to the ‘big’ high school nearby which then housed a grade 9 class at its lowest level. All the bright, clever kids were in that class as I was about to find out. Hugh invited me to come to a dance at a church hall that his friends were putting on or going to attend in large numbers. It was the biggest favour he ever did for me–opening up a large, stimulating, entertaining, educational world. There was, to boot, a girl whom I became attached too, who was herself, a bit of a snob and outsider, and we both instantly became an item, invited everywhere, and her own popularity soared by the simple fact of my mere presence.

This all happened suddenly, fast–I became and was “one of them” for several months into the grade 10 year. It didn’t hurt that my family had just moved into Billingsley Manor and I was having more friends over. I also remember from that point on seeing my various new friends walk by on Portage Ave. sometimes going out to join them.
There were numerous parties, every week it seemed–that was the year The Beatles burst upon the scene. It was such a wild, free, good clean fun time. Anything and everything by way of cool behaviors seemed possible. Overnight, my life became very full, rich, enhanced, with many seemingly endless possibilities.

And this all started with an invitation from a good friend–one that I initially fudged on as I recall. As major turning points go, that set up my senior high years, and opened up writing and music even more. I suddenly had a life, a big new life. And the only child got a lot less ‘only’ and majorly connected for three significant, powerful, incredibly formative years.

ps/ 50 years on–though the 45s, the Granny’s Kitchen bread fights, Pettigrew berets, original impromptu Sandy Nelson dancing, and the school itself have long gone, Hugh and I are still connected along with his still-best friend Dave. Though we are separated by geography (Edm. & Wpg) you could not ask for better friends and company. Bright funny guys. Nothing’s changed. Sometimes we do get very lucky.