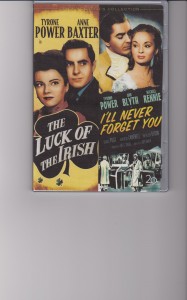 1. The Luck of the Irish: a delightful 1948 flick with Tyrone Power as a restless American who encounters a leprechaun, while in Ireland, who follows him back to modern New York, working as his manservant. There is even the novelty of a green-tinged version as well as the regular black and white version.

2. Darby O’Gill and the Little People: the 1959 take on leprechauns with a young Sean Connery. Special effects are still memorable and the banchee scene is still too intense for even young elementary-age kids.

3. Shake Hands with the Devil: (1959) the still-powerful take on the Irish-English conflict featuring a strong, crazed Jimmy Cagney as the prof by day/IRA man by night. Good on the politics and irrationality of the national violence.