“I guess if you say sho 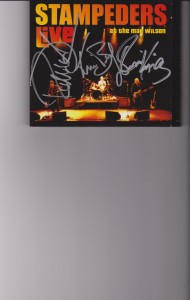 I’ll have to pack my things and go”
Or so the legendary Ray Charles declared on “Hit the Road Jack”, one of many great songs to be performed tonight at a sold-out Century Casino Showroom by the popular ’70s Canadian trio The Stampeders.

Show and catalogue include:

Devil You (the high-voiced intro typically)

Playing in the Band (the repetitive wonky hip tune minus the sexy brass, of course)

Oh My Lady (their other ballad hit)

Wild Eyes (one of the great heavy rock anthems of all time–live; the extended version with drum solo)

New Orleans (with “Hit”, the other old retro hit really rocked)–*only one they didn’t do

Stand Up (a Kinks-style rocker)

After/ Fantastic 2 hr. show. Older crowd, many dancing. Ronnie King (bass) switched to guitar for 4 songs which showcased his talents more. Amazing drum solo in “Wild Eyes”. Stuck around to meet them again. Told them they have three strong vocalists and that they were my favorite Canadian rock band (despite my growing up in Wpg. listening to The Guess Who). They certainly have had a longer career than the latter with more songs I care to listen to these daze. A wonderful way to end the week.     Next up–South Africa’s best–Johnny Clegg at the sold-out Festival Place again. Concert 6 of 6 in 2 musically live/ly fullish months.