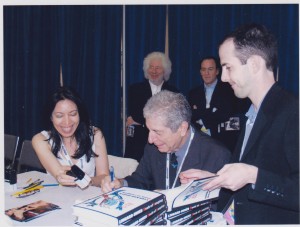 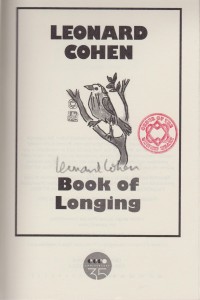 (A Polaroid of Cohen signing copies of Book of Longing with a female companion in 2006. It came with my signed copy–above– as an extra. His companion is stamping the red Order of the Unified Heart as he signs.)

A relaxing weekend with a Sunday night dream about spending some time with Leonard Cohen. A concert was taking place in a large civic centre, no seating–just sit-on-the-floor or mill-about-standing a la ’60s. My friend Bob and I were about 2 hrs. early and  sitting on the floor close to the stage when Cohen himself with a male handler plopped themselves down in front of us. Cohen, looking less gaunt–more as he did in the ’80s and early ’90s, had a big floppy hat and tinted glasses so he was mostly unrecognizable.

I asked him why he was out here and he replied that, on a whim, he wanted to see the stage from the audience’s point-of-view. I asked him how his health was and he answered “Better”. I asked him if he had written any more poetry and he said that a new collection was coming out soon. I decided to ask him about prose; he hadn’t done any novels since the ’60s. He smiled, pleased by the question, and said that he hadn’t thought of that for a while, but No, there was nothing longer forthcoming.

Glancing about, I remarked the crowd looked peaceful, laid-back. He shot a glance behind us and quipped “Changeable”. Perhaps he was thinking of how the audience might change when he began to perform and they would become more lively.

He and I got up and went out of the building, ending up at the nearby Westin. I opened the door for him and a female companion, and got to the elevator before them. Inside, they pressed the 5th top floor button. The door opened onto a large reception room with many female civic workers who were to have the privilege of a pre-concert meet-and-greet with the great poet-performer. A brash woman hosted and while she talked, I walked around the cluster of workers to a table, which interestingly enough, had various upscale Bombay-style merchandise for the home or household, and nothing pertaining to Cohen.

I left then and made my way back to the hall and my friend who asked if I got anything signed by Cohen. “No, I already have some things signed by him. I just wanted to talk to him and find out what was new, something I did when I first talked to him.”

At that moment the concert began and the drapes opened as Cohen’s band began to play “Dance Me to the End of Love.”He walked out to applause, waved appreciatively and began to sing.

Note: My dreams and imagination continue to be active past the waking hours. I feel privileged to have met a number of other famous musicians before in my dreams–including Gordon Lightfoot, Neil Young, and Bob Dylan. Cohen was very pleasant, friendly, and at ease, pretty much what most fans would expect.

If accessing site from Internet, activate any photos not showing automatically, by clicking on any picture frame.