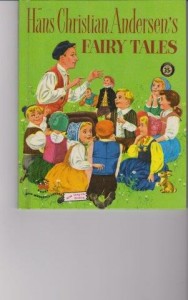 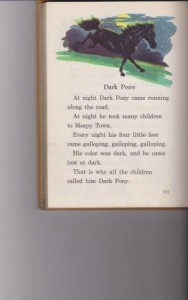 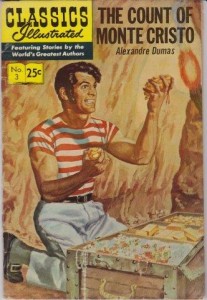 For a long time in the mid-’50s, pop culture had its way with me and I would occasionally have a children’s book or comic given to me. I read the more cartoon-based ones such as Mickey Mouse ‘Giants’–memorably there was one which featured various Disney characters for each month of the year which was sold around Christmas. Westerns were popular on tv so I read some of those, too. But I became aware of Classics Illustrated in grade 3; they were based on literary classics and cost 15 cents rather than 10 for the rest of single comics. The appeal of these was romance and they definitely anchored and nurtured my sensibility relative to books, reading, and life for years to come.

Before that, there were single books such as Wonder Books’ Hans Christian Andersen’s Fairy Tales with its evocative illustrations which ignited my imagination, again along romantic storylines. In school–grade 1–the first story I vividly remember was “Dark Pony” which appeared in The New Our Friends basic reader. The story of the mysterious pony who carries two children and a dog to Sleepy Town was the ultimate wish fulfillment and magical story for six-year-olds.

The Thornton Burgess series of animal stories were read to us in the early grades as were Bible stories one year. But by and large, comics became the way in to reading. Hugh, my first significant childhood friend (visiting me this September from Winnnipeg), also introduced me to MAD magazine around grade 7, which was starting up. Its illustrations and gags were like nothing I had ever seen before in the way of pop culture reading.

In grade 6 thereabouts, one frosty, dry fall evening, my Dad’s younger brother who had just gone into the navy was staying at my grandmother’s and I went to see him for the first time. ‘Pudge’ was a live-wire at 17 and took an interest immediately in his brother’s son. He drove us home in a car he had, and then my parents went out, so he spent the evening with me, getting to know me better. We listened to music for a while and then out of the blue, he mentioned he had some library books to return. I had never been to the library downtown (my parents never took me) and he was shocked that I did not have a card. He said he’d fix that and we clambered into his automobile (best word to describe what might have been an old Hudson) and we went to the old William Avenue library which had been generously financed by Andrew Carnegie in Winnipeg, much like the many others he initiated in hundreds of North American cities (including Edmo)–he was a remarkable philanthropist really who did much to start millions on the road to reading, learning, and self-education on this continent early in the 1900s.

So Pudge ‘got me in’–reading had affected his life and he had wanted to do something memorable for me–give me a gift of self and the invitation to read (more) in one shot.
Because of the distance from St. James to the library (on the southern tip of the rougher North End) and my unfamiliarity of how to get there by bus, that invitation would not be revisited till grade 12 when I ventured out on my own to do research toward my final English exam. The reading and book bug hit instantly then, and that summer when I worked at Winnipeg General Hospital, I came back for books by T. S. Eliot and many other famous writers I was just beginning to hear about via Bob Dylan’s songs.

Back to school–in junior high, we read a Bowdlerized school edition of Hugh MacLennan’s Barometer Rising–my first Canadian book. In grade 5, we had been read Earle Birney’s long poem “David” which itself is a memorable narrative. I memorized poems such as Wordsworth’s ode to the daffodils and Walter de la Mare’s “Someone came knocking at my wee small door” which came in handy in grade 6 when I went out Halloweening for the last time and was commanded by a ‘power-hungry’ man to recite something on his front steps before I got my apple.

And so it went–Macbeth and Robert Frost’s poems in grade 11, Hamlet, Pride and Prejudice, and Hardy’s Return of the Native in grade 12. I took out a book from the school library–Wilde’s The Picture of Dorian Gray–and presented on Keats’ “On First looking into Chapman’s Homer” and the world of literature spread out suddenly and powerfully before me at age 17. (My university major beginning the next year was easy–English.)

In grade 12, on the side, I also read the racy Catcher in the Rye and Lady Chatterly’s Lover (the latter which had just appeared in paperback); those two classics confirmed a lot of attitudes toward the adult world, conventionality, and truly wild and free living through passion and sex, in Lawrence’s case. They provided guidelines for possibilities and the beginnings of my own ‘young man’ years.
………………………..
It’s hard not to mention writing in passing…

The poem which was in the grade 9 yearbook, the writings for the school newspaper S.H.C.I.’s The Huskian from grades 10-12. The first songs and poems written in university.

I was later published by my old professor-friend Glenn Martin in Alberta English. And my poems went on to win magazine contests subsequently on the way to writing and editing over 60 school textbooks which have sold over one million thereof.