In a Previous Life 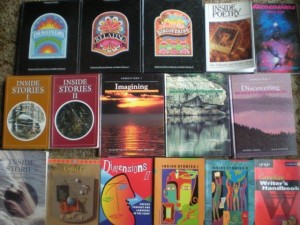 My school textbooks (minus the accompanying teacher guides) in chronological order left to right, top to bottom:

1993: Inside Stories for Senior Students

2010: Inside Media (completed, but not published)

In total, 24 textbooks, 21 teacher’s guides= 44. Many more articles, monographs. Something like 70 school-related publications in all.

These textbooks have been authorized and used in every Canadian province at some time from 1981 till now (2014) for grades 9-12 ELA. Over 1 million units sold in the past 43 years. With multiple classroom usage, used by an estimated 3-5 million Canadian students. Many of the post-1999 books remain in print.

For the record, publishers have included Gage (extinct), Harcourt (extinct), Pearson, and Nelson. My excellent co-authors, without whom none of these projects would have been possible, have included Jerry Wowk and the late Glen Kirkland, both of Edmonton Catholic schools.

Film as Text, Matters of Choice (in Writing), Metacognition: An Introduction, Sharing a Personal Response, Listening and Notetaking Skills, Understanding Character, Revise Your Writing, How to Do a Critical Response, Responding to a Photograph, Writing a Film Review.

I was also a consultant for a junior high 6 book ELA series for Pearson in 2008.

“What a man essentially is is revealed by the record of what he has done, and by what he is trying to make of himself at any given moment.”–Northrop Frye, “Myth I”