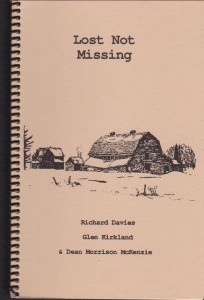 (We published two editions of this chapbook. We were on C.B.C. Radio reading our famous 3-in-1 poems, breaking up Marion Coomey. Cover was done by Kees Wouters, a former Scona colleague, now a B.C. artist.) 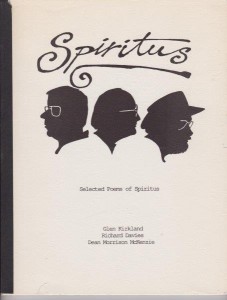 (Otherwise known as This, That, The Other, 1991–Dean took shadow impressions of our heads for the cover. “This” was Glen aka “Spook” for his Catholic connections, Richard was “That”–aka “Laddio”, and Dean was “The Other” aka “Daddio”. (Daddio, Laddio and The Spook.) We were regular readers at Café la Gare (Thanks to Thomas Trofimuk, himself now a famous novelist) and at places such as U of A, the Banff Springs, Southgate Woodward’s, Aspen Books, et al) 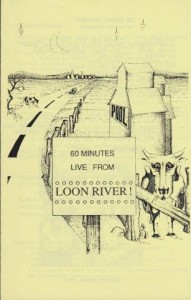 (Our foray in 1988 into drama and the Fringe. Glen played a puppet show host who had redone Hamlet, Dean played a children’s show character who had gone into WWF wrestling and singing obscene songs for children, Richard played The Producer, a cowboy singer, and Bob Dyin’. Poster by one of my students, Judd Hampton.) 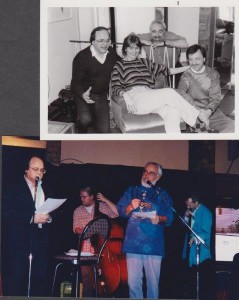 (Spiritus with Margaret Moody (Lynn Joberg), Spiritus with Solon McDade (bass) and John Towill (didgeridoo) live at Ike and Iggy’s on Whyte. Dean later went on to become The Jazz Poet and recorded 2 CDs and 2 videos still on the ‘net)