All the Others, Needed 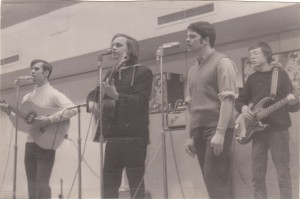 (My Winnipeg university folk group Clover, circa 1969, YMHA, in concert. Left-handed playing-strings-upside-down-on-right-handed-12 -tring-guitars Wayne, left, became a significant computer programmer for the City of Calgary from the mid-70s on; Chris, right, became a significant obstetrics doctor in Poe’s city of Baltimore; Sandy, then in high school, whereabouts and fate long unknown. Clover, one of my many past creative and performing contexts, one of my musical-needs/expressions-met-bands of the past)

All the Others to get this far, to stay (and thrive) alive, intact, finally.

Life is risk and precarious from the get-go. Those who brought us into the world–parents. It is through their care-raking that we got repeatedly fed, sheltered, cleaned up, and wised up to the most basic basics. Without parents like this, it is a heavy, harsh odds-against-start in life.

The main ‘teachers’, beginning with friends and grandparents that took an interest in us and showed us how to do things. This extrapolated to the classrooms of our lives–from elementary to college or university. And the lifelong learning situations of our adult years–the many mates, friends, colleagues, instructors, and ‘teachers’ that helped us to do better, learn, and grow.

The many experts we relied on–the massage therapists, car repairmen, tax preparation experts, dentists, doctors, et al that kept us together or intact, that kept us going or supported us. This becoming more obvious perhaps as we aged or lost abilities or independence in various ways. With them, the continued, continuing flow on many levels.

The children who, it is hoped, keep in touch or support us, reciprocally, full-circle, in return, as we move toward the inevitable light marked Exit.

Others, simply put. Without whom we would not have survived. Without whom we would have never grown, developed, learned, or been much less without. The argument, simply put for Why and How Others. Those others from the many contexts and the all-important, factual past. Particularly those who most influenced or mattered. The many homages we may (as pictured above)  or don’t pay as we get buried within and beneath the flux and snowbanks of life or death, with whatever autonomy, consciousness, and freedom we somehow manage/d to eke out.

First, to a large extent, came Others and past contexts. The next/following entry covers the here-and-now and where I ended up, process-wise, choice-wise, and context-wise.