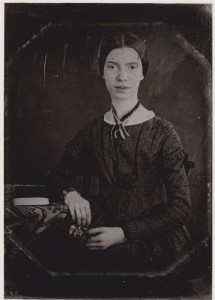 In another life, Emily Dickinson
befriended Andre the Giant
& bodyslammed him to the mat
at Riverside Coliseum.

Andre was impressed by her
technique & white dress.
‘I have always depended on
the excellence of execution,’ she winked.

For his own part, Andre went gaga
when the Belle rang his bell.
‘Me Andre, you Emily’ & sent her
roses after every Royal Rumble.

from which she lowered picnic baskets
of bananas & bread to the Giant
who visited her by moonlight,
or whenever his contract permitted.

When Andre died, it was said
she wrote him an ode with caps galore.
His last gift to her was the dropkick of love:
a tribute for all his hardcore fans.

Written in the `90s after a visit to Amherst, Mass., Emily`s hometown. To contextualize this one a bit: My kids watched and seemed to enjoy the WWF for a while, particularly the performance and theatre aspects of their tv events. I wrote this in about 10 mins., `off the top`, while waiting with for wanna-be poets to show up for assistance at a table during a local writers`event .

Something I had learned long ago from W.O. Mitchell was that if you wanted to create humor, irony, or absurdity was to put a character into a context he or she would not be caught dead in. I decided to try this x 2, marrying the contexts of poetry and professional wrestling, and found that Mitchell was right as usual. I will just add here that interesting possibilities arise in real life when you apply the same principle.

Further notes: Only known photo of Dickinson, above. Andre the Giant was very much a real person and a very popular WWF wrestler who probably never read a poem or had a `normal`date in his adult life. Emily Dickinson had her own difficulties connecting with the spear side. She did, however, admire and correspond with a Reverend Samuel Bowles who may have been the `the Master`of some of her more desirous poems. Emily did wear a white dress which you can see on display at Amherst in her bedroom. Very much a recluse, she also did lower picnic baskets with goodies to the neighborhood children who came by. The “caps” allusion is a reference to her eccentric use of capital letters unexpectedly; whomever she loved would have likely received them abundantly.