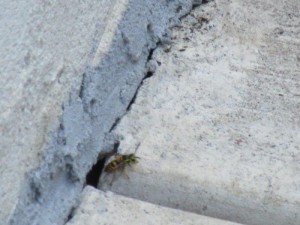 Dusk at the end of a beautiful, calm summer’s evening in August. I checked the side of the house where the vinyl garbage cans stood like sentinels as always. I had chained my bicycle to the fence that abutted them the previous day.

The problem had begun a couple of weeks ago when I noticed a few wasps circling me walking on the sidewalk there. I assumed they were after garbage or old food. There was in sight, though, no nest obvious on the exterior of the house anywhere. But then this week, I suddenly noticed one yellow jacket descend to the ground where the sidewalk joins the garage and a clever little hole, in spite of my previous cement patchings. One went in and then another, then another. The nest.

And so last evening I kept checking till the returnees dwindled to nil and then prepared to defile the peace of their sleep one last time. When you take a nest, you have to close windows first, then dress appropriately and move quickly and deliberately. relative to the ‘plan’, I wore disposable gloves on my hands and a paper mask for nose and mouth. The poisonous spray is extremely toxic and you neither want to breathe or touch the stuff. I still had some left from a previous kill several years back, and had forgotten what it looked like when it shot from the can. White. Pure white foam to cover the scene of the crime and then some. Slapstick hit and run stuff very much in my briefs and Crocs. And then a well-deserved shower after the whole day’s outdoor yard work.

Afterward, I kicked back and watched two surprisingly entertaining episodes of the 1950s cop show Dragnet with Jack Webb. The first was about a woman serial killer who turned out to be a man; the second was a humorous episode focused on Joe Friday’s wisdom tooth and his smart-assed partner Frank who had made an unannounced dental appointment “for Joe” after-hours. The funny episode ended after the criminal was caught with Frank’s finger in the foreground beckoning a surprised Joe to come with him to the appointment.

I hit the pillow about 10:30 and easily fell asleep for eight hours. While downstairs outside, perhaps a hundred or so wasps slept for more deeply, having unwillingly given up their myriad waspy lives about an hour before on an otherwise quiet, placid Friday evening.