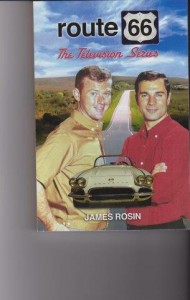 Marty (on left, above) was 83. He always played a nice, decent, friendly, ‘good guy’ and, occasionally, was a role-model for me from grades 6-8. Later, in grades 9-12, I took more after his co-star the cooler, Beatish Buz Murdock played by George Maharis (right, above;still alive at 87 today). That tv show probably influenced me and my growing-up more than any other dramatic series.

The complete series is available on DVD from Roxbury Entertainment. The excellent book shown above by James Rosin (The Autumn Road Company, 2011) has a complete episode guide and a wealth of interesting info about this classic series. Both are highly recommended. The B & W series featured many established stars and up- and-coming stars. The great Stirling Silliphant created and wrote most of the 116 1-hr.-shows. Amazingly, the CBS series filmed continuously for 4 years on the road on actual U.S. locations. The actors put in 14 hour days 6 days a week and were constantly on the road along with the whole crew.