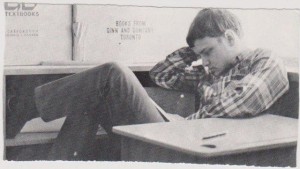 (Rick in gr. 12 English, back of class, reading poetry)

Much have I travelled in the realms of gold,
And many goodly states and kingdoms seen;
Round many western islands have I been
Which bards in fealty to Apollo hold.
Oft of one wide expanse had I been told
That deep-browed Homer ruled as his demesne:
Yet did I never breathe its pure serene
Till I heard Chapman speak out loud and bold.
Then felt I like some watcher of the skies
When a new planet swims into his ken;
Or like stout Cortez when with eagle eyes
He stared at the Pacific–and all his men
Looked at each other with a wild surmise–
Silent, upon a peak in Darien.
–John Keats, “On First Looking into Chapman’s Homer”

The spring of 1967, English 300–grade 12, Silver Heights Collegiate, Winnipeg. Mr. George Brown’s class. The context–he invited each of us to pick a poem from our poetry anthology and to read it and talk about it, possibly analyzing it.

I had cased the entire book and picked this one. Simply put, it spoke to me in volumes–to my close connection with nature, my exponentially increasing interest in and love of words from grade 12 on, my essential core interest in possibilities and beautiful discoveries, and my only-child-based solitude. It was a very freeing, liberating poem, consciousness-wise. Very much an objective correlative of where I was at then and where I wanted to go, what I wanted to be, what I would eventually become. A romantic, a lover, a writer, a poet, a teacher, a performer, a possibilitarian, a seeker, and discoverer.

I memorized those words for the oral recitation; they emblazoned my mind, heart, and soul. I spoke with passion about the meaning and purpose of the poem. It was a true defining moment of being, performance, and turning point in my life. I had been marked for a life of literature–both reading and writing thereof. I would go on to teach 3-5 thousand senior high kids about literature in a 30 year career. I would go on to talk to thousands of English teachers across Canada, again, in a 30 year span from 1980-2010. As a singer-guitarist-songwriter, I would perform for several thousand more people (kids and adults) from 1969-2003. I would go on to write over 60 widely-authorized texts and guides for Canadian senior high students and teachers, books that would eventually sell over a million copies. I would go on to write hundreds of poems as well as songs, stories, and plays and read them in many venues and have well over 100 published, winning contests along the way. I would return to my gr. 12 teacher in the 1980s and tell him personally what this opportunity had meant to me. I would finally remember this moment and tell about it here today.