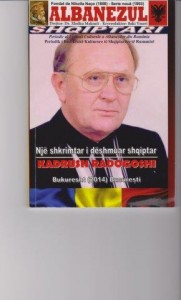 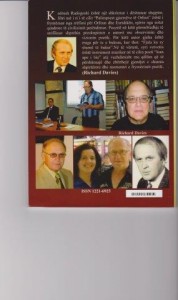 (back cover of magazine: Kadrush and his nice wife in lower centre–met her last evening; inside mag, RD’s intro to KR’s work presented in English and Romanian; my pic and blurb about KR in Romanian at top, my pic on middle right)

‘Twas fun and a privilege as usual to be in the familiar company of poetry fans such as Anne, John, and Neil. As usual, too, the same variety of subject matter and styles from the four featured readers (including me) and those of the open stage. It was an honour to be on the same stage as Albania’s Kadrush Radogoshi, whose work I had the honour to edit back in the winter.

Kadrush is easily one of the top romantic lyric poets in town. I greatly appreciated the Alabanian magazine (c.f. above) he kindly gave me which included some of the work I had edited and was pleasantly surprised by the pictures and references to me in it. And the Italian bottle of Villa Teresa Merlot vino as a thank-you. Kadrush is a true gentleman and a scholar, who also read a metaphorical homage to several of his new Canadian poet-friends, including me. Another unexpected pleasure.

Alice Major, Edmonton’s top published poet since circa 1990 A.D., was also on hand to host the evening, and I bought and am looking forward to reading her impressive new collection Standard candles, which looks strong and unique as always.

I return to the Upper Crust next week to host the next event myself. These are both definitely highlights on my fall literary calendar.

This morning it’s off to Sylvan Lake for a glorious, sunny, 20ish fall day. I will do some watercolours with a birthday gift while myriads of people trudge off to their 9 to 5s. Retirement, now into its 13th year, still agrees with me. The continuing savoured freedom with no one telling me what to do–free to call my own shots and follow my bliss, as has long been the case. Have I said I’m a lucky man?