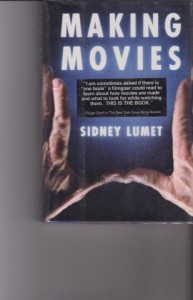 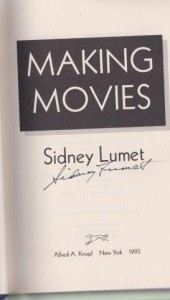 (book recommended by Roger Ebert, signed; Lumet films were nominated over 50 times for Academy awards; they included the classics: 12 Angry Men, The Fugitive Kind, A View from the Bridge, Long Day’s Journey into Night, Fail-Safe, The Pawnbroker, Serpico, Murder on the Orient Express, Dog Day Afternoon, Network, Equus, Deathtrap, The Verdict, Prince of the City, King: A Filmed Record, The Iceman Cometh, Before the Devil Knows You’re Dead)

“I think I now know, Kostya, that what matters in our work–whether you act on stage or write stories–what really matters is not fame or glamor, not the things I used to dream about, but knowing how to endure things. How to bear one’s cross and have faith.”
(Nina)

One of the best adaptations of Anton Chekhov ever committed to film. Master director Sidney Lumet assembled a super cast including James Mason (later appearing in Lumet’s The Verdict), Vanessa Redgrave (fresh from Blow-up and Morgan, later in Lumet’s Murder on the Orient Express), Simone Signoret (veteran French actress), David Warner (before Straw Dogs), Harry Andrews, and Denholm Elliott (of A Room with a View and The Apprenticeship of Duddy Kravitz).

Shot in Sweden. Highly recommended for any Chekhov fans.