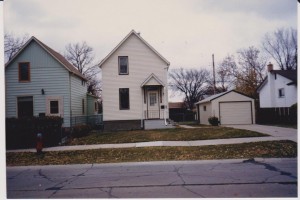 (the childhood home, centre, some 30 years later in the 1990s–after a garage and paved driveway had been added and a caragana bush in front was removed)

Grade 4. My mother’s farmer-father had come to stay with us. He was in his late 50s and spoke only a harsh Ukrainian that only my mother understood as she tried to cater to him. I was directed to avoid him. And so on a memorable Saturday night, my Dad unexpectedly took me out to a Winnipeg Warriors minor pro hockey game at the newish Winnipeg Arena.

It would have been in the first period that a P.A. announcement was made for ——– which didn’t sound like his name, but my father must have sensed the notice was for him and he left me to check. When he came back, he said “Grandpa died and I’ve got to go home. Here’s some bus money to get home. Stay and watch the game.”

Which I happily did, enjoying a treat on the money he magically gave me (We were always poor). For an only child, suddenly empowered, it was frankly fun. I was suddenly left by myself in a crowd of strangers. In the first intermission I giddily walked the concourse around the rink through the knots of adult men smoking before coming back to my seat.

The November bus ride home was similarly memorable–I didn’t usually travel by myself on bus or on Saturday nights when I’d be at home watching what was then an early tv version of ‘Hockey Night in Canada’. I recall it was a spooky long walk in the cold darkness up my street to the World War 1 house we lived in, without a clue of what I’d find when I got there.

Inside, no sign of my grandfather who’d died suddenly of a stroke standing by the stove, vainly trying to warm up his hands over the burners. My mother sat at the table crying and my Dad was trying to comfort her. I knew something majorly sad had happened, but in those days, many kids were largely kept at the edges of death to spare them whatever pain or grief. Maybe then that was moreso for only kids like me, or was in my case for sure.

Going to sleep that night under the cold covers, I thought about what a great game it had been and the abruptness of being regarded old and responsible enough to be left on my own to be left alone and to make it home from a considerable distance. For me, it had still been a heady evening, but I was glad that both my childhood home and parents were still there when I returned, after my grandfather had been so quickly taken away, even though now everything seemed so strangely changed and different.

And then I thought for a long time about the timing of the death–how a special evening out with my Dad had hastily ended, his sudden shift in tone and behavior at the game, and my mother still weeping in the kitchen for the father I knew who had treated her harshly and unlovingly, as just one dumb farm kid of a brood of ten.

And I thought, too, of what had become of a grumpy old man who spat sharp incomprehensible words at us in our home, why he had even come to visit and died just like that. Whatever the case, It was quite clear, though, to me that night as I went off to sleep, that he had absolutely no interest in hockey.