The Classic War Film: All Quiet on the Western Front (1930) 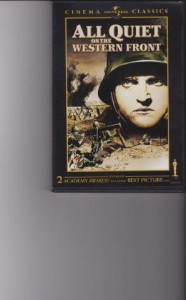 Everything that you didn’t want to know about war and were afraid to ask. A must-see anti-war film for anyone 14 and older, male or female. Winner of two AA’s including Best Picture (1930) very deservedly. A tremendous adaptation of Erich Maria Remarque’s classic novella. Hard to believe it’s now 85-years-old and as relevant and necessary as ever.

Although the fictional material is a German take on WW1, this is really a comprehensive, archetypal take on twentieth-century war, period. It’s all there: the phony-baloney jingoism and patriotism espoused by elder males, the propaganda of “Dulce Et Decorum Est”, the rough transition into soldierhood, the first reconnaissance and deaths in combat, the sudden loss of friends, the catalogue of mud, trenches, rats, lice, starvation, madness, PTSD, constant noisy bombardment, the grisly hospital realities with amputations, the need for female comfort, the problems of leave and homecoming, the gap between soldiers and civilians, the lack of true understanding of war in anyone who has not served, and the huge, tragic, absurd, inevitable losses. Yes, director Lewis Milestone created the archetypal war film of all war films.

Lew Ayres is handsome, likable and believable as the essentially good teenager Paul who is the fated tragic protagonist–himself an observer and apprentice to war. It is through his eyes that the waste and meaninglessness of war is amply illustrated and revealed.

The effectively-chosen episode blackouts create a connected pall and bleak atmosphere about the events and reactions in each episode. The soundtrack is unsettling with numerous bombs going off and the perpetual din and cacophony of war battlefield noise. The viewer is very much into the thick of things well before the halfway point when the enemy breaches the trenches and starts killing the German soldiers.

The last scenes at Paul’s house and the bar in his hometown as well as at the school and with his war ‘mentor’-friend are knockouts leading to one of the great poetic conclusions in all of film, foreshadowed by Paul’s earlier love of Nature and beauty.

Although war technology has changed, this film covers the basic  ‘boots-on-the-ground’ essence of land warfare. It is an eternally true film which captures the experiences of raw young recruits as well as male experiences of war. For anyone 14 or older, male or female, it is, has been, and will continue to be basic information about the hell and pity of war. The ironically-titled All Quiet on the Western Front is a bona-fide classic, now available in the beautifully-restored Universal DVD issue of pictured above. A film to own.