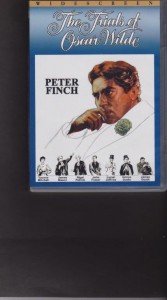 Finally released on widescreen, starring Peter Finch as a reasonable facsimile of Wilde, John Fraser as a believable Lord Alfred Douglas, James Mason as a sneaky prosecutor, and Nigel Patrick as the loyal defence lawyer. The movie advisors included Lord Cecil Douglas (son of Lord Alfred’s brother) and Vyvyan Holland (the younger son of Wilde). The main focus is on the trials in the second half of the film. the film sticks to the facts more than any other Wilde film.

Although I know the subject well, I found many previously unknown facts such as Wilde’s defence lawyer staying on for the three trials because he didn’t think it fair that the courts enthusiastically approved testimonies by corrupt, questionable young men. Wilde’s name was covered up on all posters advertising The Importance of Being Earnest which ran during the trials. The Marquis of Queensberry tormented Wilde after the trials as well, showing up at an auction of Wilde’s belongings.

The piece is well-acted by all and there are many famous Wilde quotations in the script throughout. Ironically, this film was released the same year as Oscar Wilde, starring Robert Morley as a strong Wilde with Ralph Richardson and John Neville, who was later the first significant director at the Citadel Theatre.