The Garden and the Beast Within 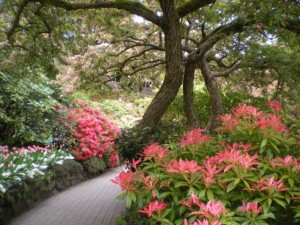 A basic continuum and duality.

Was watching a DVD of beautiful Japanese gardens and recalling those I’ve visited in the past. The overall peaceful, harmonious, civilized feel to such a pace/context. How time is magically slowed down as you watch scenes of absolute stillness juxtaposed with very slow movement such as raindrops falling on pools or rings emanating slowly from the drops hitting the water, or slow-gliding goldfish of various sizes. The steady sound of water flowing, babbling, splashing over rocks.

And on the other end of the same continuum, I see the Beast Within of Lord of the Flies, King Lear, the Middle East, ISIS blowing up people and great ancient monuments, child-bombers (a complete evil destruction of innocence), pipelines, fracking, irrational hate and war. Zero interest in flowers, gardens, people as ends in themselves, civilization and its many fruits up to the 1990s. Primitive people, animal-like or worse, often soulless and totally unempathic.

I also envision something that hates Beauty and Nature as well as the simultaneously built-in, indifferent “Nature red in tooth and claw” aspects of animals killing one another and forces of Nature– tornadoes, floods, and ice storms destroying, willy-nilly, people and their lives.

In all of this, how Nature per se contains the duality Man plays out irrationally, blindly, and impersonally. The capacities for peaceful civility and brutal violence built into both Nature and Man, Man being part of Nature playing out what has always been in the background/context.

But I am left pondering the main difference between the two of unique, irrational human hate, even though gentleness, peace, tenderness, and potential nurturing are so built-in and remain possible within and for both Nature and Man.

Meantime, there is, in many of us out there, something that doesn’t love a garden.