In the Midst of Life, We Are… 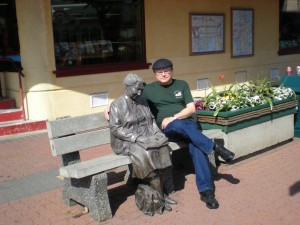 “And many are the dead men too silent to be real”–Gordon Lightfoot, “Canadian Railroad Trilogy”

Lightfoot speaks of the many nameless workers who gave their lives to forge the Canadian Dream of the 1870s and 1880s which united this country. Like any history, there is the recognition that we arise from the past, from the often-forgotten contributions and efforts of others–the many dead.

I was reminded of this truth, yet again, recently in Victoria. The significance and uniqueness of Emily Carr’s art, the long elegant past of the Empress Hotel, the myriad 1800s houses which are just back of the main drag, the centuries-old Chinese art on display at the art gallery there, the Spencer mansion nicely restored attached to the gallery, and all the ghosts evoked by these unique places.

The strangest things will likewise evoke similar thoughts. The Miniature World with its many scenes of human history; even the wax museum which exists to stir a connection with the dead via its own attempts at facsimiles and reproduction.

Returning home via plane continued the same line of thought. That portion of the trip started with no plane in its bay or in sight, no announcements regarding the delay, and tv screens announcing we were boarding. Curious and playful as ever, I wandered over to the departure desk and asked if we were “virtually boarding” to a puzzled hostess. I pointed beyond her to the screen which announced the same news. She looked and said, “I guess we are.”

Later, once we were really up in the air, with a third-full plane–some 30 passengers, and tv screens that didn’t work for the free satellite programming, I noticed the profile of the elderly woman sitting across from me and on the aisle one row ahead. She was in her early 70s, a spitting image of my mother, now seven years gone. Everything about her was the same. Every new gesture or movement proclaimed the uncanny likeness. She even fingered her rings the same way. She moved her hand to her mouth the same way. And so on and so forth.

She had the same frosted hair, the same sunken areas below the eyes, the same wistful expression, the same greyish eyes, the same size and body shape. She was even doing a newspaper crossword, much as my mother used to do the daily Jumble. She had on a flashy silver jacket, not unlike the fancy jackets my mother chose to wear. It was hard not to keep looking at her the rest of the flight.

My thoughts were many. Perhaps this was my last flight and she was an omen and escort to the land of the dead. I even thought of uttering her name aloud to see just how far the coincidence might go (but didn’t). Amazingly, she had gotten on at Victoria and was headed to the same destination–Edmonton–a city my mother did not like as much as her hometown of Winnipeg.

Mysteriously, she vanished ahead of me when we deplaned. There was no sign of her in the terminal or at the baggage pick-up. I concluded that the coincidence was a favorable sign of her continuing presence, perhaps in other people and in other contexts. In any case, she looked like her old self and was much as she always was and had been. Overall, a positive, possible ‘visitation’.

I had not thought of my mother for a while, on or just before this trip. There is much of her still in me and around me, by way of photos and artifacts and humorous remembered one-of-a-kind anecdotes. In the midst of life, we are…

Yes, I am also reminded of this each day when I open the delivered newspaper and read of a mother killed by her husband, murders by co-workers who lose it, babies’ obituaries, and so forth. In the midst of life…

In my study, I look around me this morning at the many books written mostly by numerous dead authors. I think about the long-dead great actors and actresses, the deceased giants of art and architecture with whom I share a vicarious affinity–those many geniuses who continue to influence some of us today. I look out the window and see a cat hanging around the bird feeder, and imagine the very real poodle that used to walk around the yard. In the midst of….And I think, too, of those I once knew, loved, and enjoyed who are no more except in whatever remaining personal memories.

And yet I do not find any of this particularly troubling or fear–as many do–for their own demise. This is just the way it is and has always been as part of the nature of process and life. Instead, I find a strange comfort and familiarity as much as a palpable confirmation. Death–a mysterious fact–is simply at the core of our daily lives in various forms and manifestations. It is there for anyone to imagine and explore for whatever meanings and answers one might turn up.

Most of us are hip to change and the eternal ephemeralness of life experience. But there is this much larger perspective that surrounds us and informs us at the same time. The coincidences are there. The mysteries are there. They ‘speak’ to us. And the dead, as always, continue to offer their gifts of self from their own lives and distant once-present pasts.

Listen. Reflect. It only takes acceptance, openness, and receptivity to experience the fuller consciousness, understanding, and appreciation the former three may ultimately have to offer us.