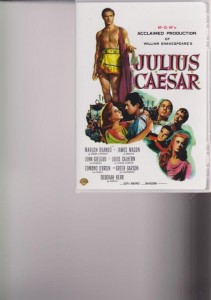 Frank Shuster’s great recurring line in “Rinse the Blood off My Toga”, Wayne and Shuster’s classic spoof of Julius Caesar and private detective tv shows of their day. They knew what the core of this tragedy was really about.

To be sure, Shakespeare’s play is all about trust and its recurring common failure in public life. Caesar not trusting his senators and various warnings as well as his own intuitions. Cassius, the brightest man in the play, not sure if Anthony can be trusted, and caving in to Brutus twice against Cassius’s intuitions and better judgement twice in the play. The ignorant mob being swayed first one way by Brutus, then Mark Anthony, Brutus trusting (wrongly) that Anthony will not speak against him and the other conspirators. After Caesar’s murder, Anthony making plans with Octavius to turf their triumvirate partner against the rebels, Lepidus, Brutus falling out with Cassius over bribes and lack of financial support, not knowing whether he can trust his old friend. On and on.

Shakespeare repeatedly challenges the audience to find instances of abiding or lasting trust instead of non-stop betrayals and ongoing, widespread suspicion. When authority (Caesar) is unjustly and murderously removed (note Pompey suffered the same fate in the play’s antecedent action), fantastic doomsday-like horrors are unleashed upon the world, as in the unnatural chaos that foreshadows all the violence and tragedies in this play. And, thus, with the betrayal of trust ,”The evil men do lives after them”, and those who have been disloyal and selfish all end up dead. Much as in Hamlet, Macbeth, King Lear, the destruction of loyalty, order, love, trust, and friendship inevitably leads to comeuppances, chaos, and mass deaths.

Have the times changed much since Shakespeare’s day? Who can you trust today?

ps/ (pictured above–recommended MGM DVD–The best film adaptation of this classic play is the 1953 movie with Marlon Brando as Anthony, James Mason as Brutus, and John Gielgud as Cassius.