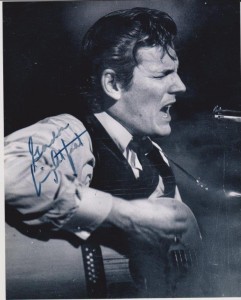 (on my desk, a signed performance photo of GL in his more youthful prime, from a concert most likely in the late 60s or early 70s)

For the past four years thereabouts, I have had infrequent dreams about people who have interested me, often music people. In them, I have ‘met’ Joni Mitchell, Bob Dylan, Leonard Cohen, and others–all interesting encounters with a chance to talk to these people, ask them questions, and to find out more info. (For me, a key part of my daily life is getting or receiving whatever info on a variety of topics and experiences. An influential book was The Information which came out about 3-4 years ago and is a ‘different’ history of information, human interest and technology with regard to information. For me, info is pretty basic in any case, often growing out of ever-morphing personal curiosity and whatever the day’s topics of interest turn out to be.)

Anyway, I spent some time with Gordon Lightfoot out of the blue last night (possibly triggered by my T.O.-born friend I dined with last evening. I gave him a 1952ish T.O. subway map of the city which immediately took him on a journey to the end of town then where he lived, him pointing this out on the map–his home 3 blocks from the Lake Ontario). In the dream, I talked with GL about how his early songs (album 2–The Way I Feel) had been significantly connective; e.g., you are in that room he describes in “A Song for a Winter’s Night”, or that 1967’s “Canadian Railroad Trilogy” was both timely and mythically connective for many Canadians–E.J. Pratt epic-poem style set to music.

But eventually I asked him about something that had put me off in two concerts in two different cities–Wpg & Edm–that I had attended within two years, in which he had stopped the concerts, apologized for the sound, saying he and the band could do much better, took a break while the crowd in the lobby wondered what was or had been wrong, then resumed the show in top form with no apparent significant changes to the sound. Mystery.

I know he may had alcohol problems early in his career, and later attributed the stoppages to that. But whatever the case may have been, it was the sound that had been truly bothering him. In those days-the -early 70s–bands were not using monitors yet and couldn’t hear themselves; also concert halls provided the show sound, not sound crews of the performer. In the dream, he did talk at length about how the sound was not right and how he did not want to give a flawed or lesser show. In other words, GL was very much a perfectionist (reflected in later strong concerts), who was more concerned about the sound of those shows more than anyone else in those venues. Perhaps he could hear things which didn’t work for him, that he felt short-changed the fans that came to see him.

Anyway, a long way of saying you sometimes get the info, or the truth about something eventually or even much later. The answers to whatever questions will often come from within; they will ‘bubble up’–TM style–on their own when they are ready. There is often some purpose to these strange nocturnal encounters. And sometimes even truth or more accurate info may emerge.

So, a limited understanding of some sort, though I accept there’s a lot of mystery going on regardless in these highly subjective experiences. But I don’t discount the potential learning value and personal satisfaction one can ultimately derive from such ‘irrational ‘ episodes and sources.