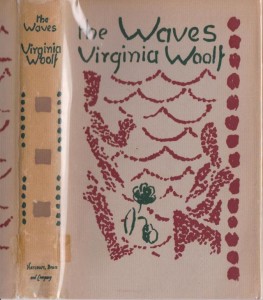 “Here in the few minutes that remain, I must record, heaven be praised the end of The Waves. I wrote the words O Death fifteen minutes ago, having reeled across the last ten pages with some moments of such intensity and intoxication that I seemed only to stumble after my own voice, or almost, after some sort of speaker (as when I was mad) I was almost afraid, remembering the voices that used to fly ahead. Anyhow it is done; and I have been sitting these 15 minutes in a state of glory, and calm, and some tears, thinking of Thoby [her older dead brother] and if I could write Julian Thoby Stephen 1881-1906 on the first page. I suppose not. How physical the sense of triumph and relief is! Whether good or bad, it’s done; and, as I certainly felt at the end, not merely finished, but rounded off, completed, the thing stated–how hastily, how fragmentarily I know; but I mean I have netted that fin in the waste of water which appeared to me over the marshes out of my window at Rodmell when I was coming to the end of To the Lighthouse.

What interests me in the last stage was the freedom and boldness with which my imagination picked up, used and tossed aside all the images, symbols which I had prepared, I am sure that this is the right way of using them–not in set pieces, as I had tried at first, coherently, but simply as images, never making them work out; only suggest. Thus I hope to have kept the sound of the sea and the birds, dawn and the garden subconsciously present, doing their work under ground.”
–Virginia Woolf, A Writer’s Diary