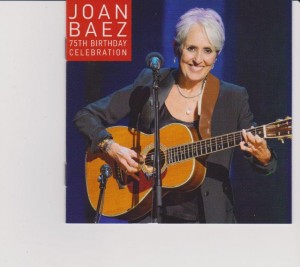 (easily The Folk Music Event of the Year–Two thumbs way up!)

Still beautiful and intact from her injury falling out of tree a few years back (pulled a Keith Richards) and in fine voice. A walk down memory lane with such solo-played classics as Phil Ochs’ “There But for Fortune”, Bob Dylan’s “Forever Young”, Steve Earle’s “God Is God”, The Band’s “The Night They Drove Old Dixie Down”. But the main delights turn out to be the duets, likewise all live at the Beacon Theatre in New York including Joan with David Crosby doing McCartney’s “Blackbird”, with Mary Chapin Carpenter doing Donovan’s “Catch the Wind”, with Mavis Staples singing gospel, with her old ‘rival’ Judy Collins doing “Diamonds and Rust” (her song about Dylan), with Paul Simon doing “The Boxer”. What a delightful, outstanding concert on 2 CDs (Razor & Tie), and especially the DVD!