A Key Influence from the Past 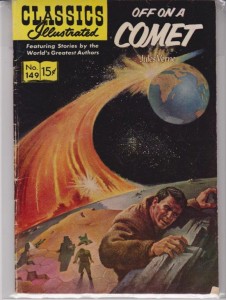 Classics Illustrated came into my world about age 10 (1959ish) and I’d have to say that it and MAD magazine were the earliest influential ‘book’ readings long after whatever Golden books in my pre-school days. Each issue was based on a classic book and one acquired  a strong sense of other worlds and possibilities, real and imagined, if one was a fan or collector.

I’d have to say that my notions of story, adventure, and romance were all stimulated by the issues I read. The comics were clearly aimed at young male readers so my imagination got a lot of encouragement and inspiration. (Like so many teens of the day, my sense of romance and love was also inspired by the top 40 songs of the day, incidentally.)

Many years later, I eventually collected one copy of each of the 169 issues. All this time later, the memories are still prodded and stirred by the jacket art and, particularly, by the sight of familiar issues I once owned and treasured.

Looking at the Jules Verne issues pictured above, you can see how exciting and adventurous many of the issues were. In a world of ’50s black-and-white movies and tv, these colorful comics were like gold to kids and helped to stimulate an interest in romance, adventure, stories, and literature.