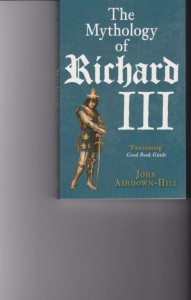 The longer you live, the more you realize how subjective and agenda-ed “Truth” is. And how politicized everything is. I still remembering reading Josephine Tey’s excellently entertaining and suspenseful The Daughter of Time for an English 20 course (grade 11 academic) I was getting ready to teach. I was very impressed by all the history and emerging truths and epiphanies. It was just such a neat book blending fiction, mystery, and real history. And Tey made the reader feel like he was being let in on a secret and miscarriage of justice with regard to Richard’s personality and reputation. Long before I read 1984, in this book I encountered U.K. truth-effacers and vested interest/agenda-ed types hard at work exerting power and control over the public with a tissue of lies.

Getting at the truth about people and events in history is life-long work potentially, as John Ashdown-Hill, the author of The Mythology of Richard III has learned over the decades as he constantly tries to keep truth upfront about a controversial historical figure, the notorious king whose bad reputation was ensured by Shakespeare’s famous history play.

Ashdown-Hill’s research on RIII was instrumental in motivating the Looking for Richard project that led to the discovery of Richard’s gravesite, referenced as ‘The King in the Car Park’ (a phrase that was the title of an amazing U.K. documentary)..He does a nice job of keeping facts to the forefront and pointing out errors that the City of Leicester and U of Leicester have made since taking over Richard’s remains and all the glory of the recent dig and story. (Basically, the city and university have ‘written out’ the author and work of the Looking for Richard project–a similar kind of whitewash and rewriting of history that the Tudors did on Richard.)

To begin with, Ashdown-Hill argues convincingly for Richard not being ugly and misshapen, not being a serial killer, not being Anglican, and not being a usurper or tyrant. He dispells burial myths and reveals how he suggested places to dig to find the dead king’s body and actual gravesite. He reveals the big money in the tourist trade the city and university has unfairly usurped out of the selfless work of a great many other individuals and the Looking for Richard group. What is perhaps most bothersome to the author is how his findings have been ignored to the point of still misrepresenting Richard and many facts. Overall, this is a must-read book for anyone interested in English history, Richard III, historical research process, and how truth gets bent to serve the interests and greed of others.

Below is my own poem about Richard based on my knowledge of The Daughter of Time book and The King in the Car Park documentary. Perhaps what has bothered me most from the various agendas has been the actual man permanently lost in the process/es. He wasn’t perfect, but the amazing abuse and indignities he subsequently suffered were likely not deserved in the great scheme of things…

O brave new world,
what fools these mortals be!
They found me under a car park
several feet down–Richard.
A gentle woman’s touch
released me from my private peace.
A slow, loving process
I had never known before.

Conniving and entitlements–
I once wanted it all.
Little did they who found me
know I wanted to be left alone
where I could not be hurt again,
to suffer further indignities.

And so they boxed and dated me,
then stood around my bones
in dark sterile rooms
wondering who I really was.
It was just a matter of more time
till technology and speculation
would have their way with me,
my puzzle-bones and their agendas.

They rejoiced to restore me
(or so they thought),
missing every inner bit that mattered
of feeling, dream, and passion.
A life, a man, being so much more
than identity and physical evidence
that I once was and still am, here.