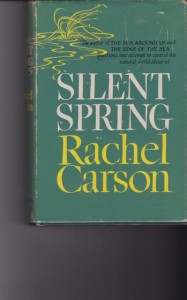 My rare signed Silent Spring flatsigned by Rachel Carson showed up. She is one of three 20th century women who has really impressed me forever. In case you don’t know, she is the little lady who brought the U.S. government of JFK, Union Carbide and all the major chemical companies of the early ’60s to their knees with her masterpiece–this book. It is an honour and a privilege to be able to hold, touch, and own a copy of her opus signed by Carson herself. Owning this book and my signed Virginia Woolf from 2016 are huge dreams come true. Two of The truly Great Women of the past century. It does not get any better for this serious book collector. Spiritual experiences and connections of the highest order. Absolutely sublime! I am truly gobsmacked.