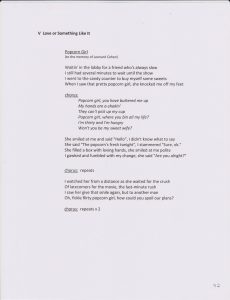 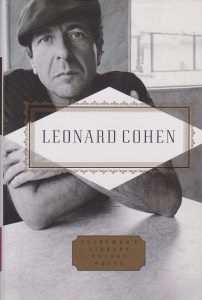 And so the long-time influence of Cohen eventually permeated my songwriting when I composed this ditty in the ’80s. I tried to include the pathetic pathos of Cohen’s early humorous songs like “One of Us Cannot Be Wrong” in which he casts himself as the anti-hero schnook chasing one impossible woman or another.

Though I came by the subject matter honestly from all the movie theatres I once frequented from the 1950s to about 2015 or so when I stopped going to what-have-become cinematic playgrounds. At any rate, there is nothing quite like the smell of popcorn when one enters a theatre building. These days, here, we periodically relive that smell during a game or movie.