My Favorite Quotes by Shakespeare 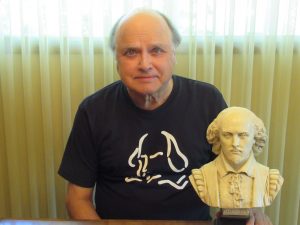 There are many quotable lines and speeches taken from Shakespeare: “Beware the Ides of March”, “It was Greek to me” , “Romeo, Romeo, wherefore art thou Romeo?”, but some have a greater ring of truth than others and I have selected some below which have stood out for or influenced me significantly.

“Love looks not with the eyes but with the mind.” -Midsummer Night’s Dream

“Nothing can come of nothing.” -King Lear

“Can one desire too much of a good thing? -As You Like It

“True it is that we have seen better days.” -As You Like It

“Wisely and slow; they stumble that run fast.” -Romeo and Juliet

“I bear a charmed life.” -Macbeth

“The play’s the thing.”
–Hamlet

“The native hue of resolution
Is sicklied o’er with the pale cast of thought.”
-Hamlet

“There is a divinity that shapes our ends,
Rough-hew them how we will.”
-Hamlet

“We are such stuff
As dreams are made on, and our little life
Is rounded with a sleep.”
-The Tempest

“The fool doth think he is wise, but the wise man knows himself to be a fool.”
-As You Like It

“Lord, what fools these mortals be!”
-Midsummer Night’s Dream

“There is a tide in the affairs of men
Which, taken at the flood, leads on to fortune.”
-Julius Caesar

“What’s gone and what’s past help
Should be past grief.”
-Winter’s Tale

“Ay, sir; to be honest, as this world goes, is to be one man picked out of ten thousand.”
-Hamlet

“Forbear to judge, for we are sinners all.”
-Henry VI, Part II

“Give every man thine ear, but few thy voice;
Take each man’s censure, but reserve thy judgement.”
-Hamlet

“We know what we are, but know not what we may be.”
-Hamlet

“Love sought is good, but given unsought is better.”
-Twelfth Night

“To hold, as t’were, the mirror up to nature.”
-Hamlet

“One touch of nature makes the whole world kin.”
-Troilus and Cressida

“There are more things in heaven and earth, Horatio,
Than are dreamt of in your philosophy.”
-Hamlet

“I am a man
More sinn’d against than sinning.”
-King Lear

“There is nothing either good or bad, but thinking makes it so.”
-Hamlet

“To thine own self be true.”
-Hamlet

“Brevity is the soul of wit.”
-Hamlet

“For I am nothing if not critical.”
-Othello

“Some are born great, some achieve greatness, and some have greatness thrust upon ’em.”
-Twelfth Night

“All the world’s a stage,
And all the men and women merely players;
They have their exits and entrances;
And one man in his time plays many parts.”
-As You Like It

“The quality of mercy is not strain’d…
It blesseth him that gives and him that takes.”
-The Merchant of Venice

“We have heard the chimes at midnight.”
-Henry IV, Part II

“When sorrows come, they come not single spies,
But in battalions!”
-Hamlet

“If music be the food of love, play on,
Give me excess of it”
-Twelfth Night

“The poet’s eye, in a fine frenzy rolling,
Doth glance from heaven to earth, from earth to heaven;
And as imagination bodies forth
The forms of things unknown, the poet’s pen
Turns them to shapes, and gives to airy nothing
A local habitation and a name.”
-A Midsummer Night’s Dream

“In delay there lies no plenty.”
-Twelfth Night

“Our remedies oft in ourselves do lie.
Which we ascribe to heaven.”
-All’s Well That Ends Well

“All that live must die,
Passing through nature to eternity.”
-Hamlet

“Use every man after his desert and who would ‘scape whipping?”
-Hamlet

“We must speak by the card, or equivocation will undo us.”
-Hamlet

“The readiness is all.”
-Hamlet

“The time of life is short;
To spend that shortness basely were too long.”
Henry IV, Part 2

“O! for a Muse of fire, that would ascend,
The brightest heaven of invention.”
-Henry V

“The fault, dear Brutus, is not in the stars
But in ourselves, that we are underlings.”
-Julius Caesar

“But I am constant as the northern star,
Of whose true fixed and resting quality
There is no fellow in the firmament.”
-Julius Caesar

“How sharper than a serpent’s tooth it is
To have a thankless child!”
-King Lear

“I am tied to the stake, and must stand the course.”
-King Lear

“Fair is foul, and foul is fair.”
-Macbeth

“Nothing is, But what is not.”
-Macbeth

“There’s nothing serious in mortality.”
-Macbeth

“To-morrow, and to-morrow, and to-morrow,
Creeps in this petty pace from day to day,
To the last syllable of recorded time;
And all our yesterdays have lighted fools
The way to dusty death,
Out, out, brief candle!
Life’s but a walking shadow, a poor player
That struts and frets his hour upon the stage,
And then is heard no more: it is a tale
Told by an idiot, full of sound and fury,
Signifying nothing.”
-Macbeth

“Men should be what they seem,”
-Othello

“Then you must speak
Of one that loved not wisely but too well.”
-Othello

“He jests at scars, that never felt a wound.”
-Romeo and Juliet

“These violent delights have violent ends.”
-Romeo and Juliet

“How beauteous mankind is! O brave new world
That has such people in ‘t!”
-The Tempest

“When in disgrace with fortune and men’s eyes
I all alone beweep my outcast state.”
-Sonnet 29

“Haply I think on thee–and then my state,
Like to the lark at break of day arising
From sullen earth, sings hymns at heaven’s gate;
For thy sweet love remembered such wealth brings
that then I scorn to change my state with kings.”
-Sonnet 29

“Not marble, nor gilded monuments
of princes shall outlive this powerful rhyme.”
-Sonnet 55

“Love is not love
Which alters when it alteration finds,
Or tends with the remover to remove:
O, no! it is an ever-fixed mark.”
-Sonnet 116

“Love’s not Time’s fool, though rosy lips and cheeks
Within his bending sickle’s compass come.”
-Sonnet 116

“The expense of spirit in a waste of shame
Is lust in action; and till action, lust
Is perjured, murderous, bloody, full of blame
Savage, extreme, rude, cruel, not to trust.
-Sonnet 129

“All that glisters is not gold.”
-Merchant of Venice

“The dog will have his day.”
-Hamlet

“Thereby hangs a tale.”
-Taming of the Shrew

“If it were done, when ’tis done, then ’twere well
it were done quickly.”
-Macbeth

“Dost thou think because thou art virtuous there shall be no more cakes and ale?”
-Twelfth Night

“I must be cruel only to be kind.”
-Hamlet

“What a piece of work is a man, how noble in reason, how infinite in faculties, in form and moving how express and admirable, in action how like an angel, in apprehension how like a god! the beauty of the world, the paragon of animals.”
-Hamlet

“There is special providence in the fall of a sparrow.”
-Hamlet

“But I have that within which passes show.’
-Hamlet

“I do not know
Why yet I live to say this thing’s to do,
Sith I have cause, and will, and strength, and means to do ‘t.”
-Hamlet

“The time is out of joint–O cursed spite,
that ever I was born to set it right!”
-Hamlet

“The whirligig of time”
-Twelfth Night

“Now is the winter of our discontent”
-Richard III