The Concise Wisdom of Robert Frost 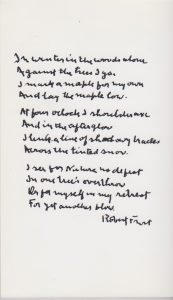 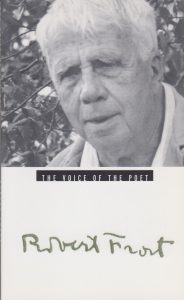 Two roads diverged in a wood, and I— /I took the one less travelled by, /And that has made all the difference.

Yet knowing how way leads on to way, /I doubted if I should ever come back.

The best things and best people rise out of their separateness; I’m against a homogeneous society because I want the cream to rise.

We love the things we love for what they are.

The world would not find me changed from him they knew—/Only more sure of all I thought was true.

The afternoon knows what the morning never expected.

In three words, I can sum up everything I’ve learned about life: it goes on.

One could do worse than be a swinger of birches.

The most creative thing is to believe in a thing.

…what to make of a diminished thing.

A person will sometimes devote all his life to the development of one part of his body—the wishbone.

What we live by, we die by.

Ah, when to the heart of man /Was it ever less than a treason /To go with the drift of things, /To yield with a grace to reason, /And bow and accept the end /Of a love or a season?

I have been one acquainted with the night.

I am overtired Of the great harvest I myself desired.

Nothing gold can stay.

Some say the world will end in fire Some say ice.

It looked as if a night of dark intent /Was coming and not only a night, an age. /Someone had better be prepared for rage.

There would be more than ocean-water broken /Before God’s Put out the Light was spoken.

What design of darkness to appall? /If design govern in a thing so small?

I have a mind myself and recognize /Mind when I meet with it.

I may return /If dissatisfied /With what I learn /From having died.

Earth’s the right place for love /I don’t know where it’s likely to go better.

I had a lover’s quarrel with the world.

From what I’ve tasted of desire /I hold with those who favour fire.

A mother takes twenty years to make a man of her boy, and another woman makes a fool of him in twenty minutes.

We shall be known by the delicacy of where we stop short.

I’d hold it to be the inalienable right of anybody to go to hell in his own way.

The world is full of willing people, some willing to work, the rest willing to let them.

Never be bullied in silence. Never allow yourself to be made a victim. Accept no one’s definition of your life; define yourself.

It is far better for a man to go wrong in freedom than to go right in chains.

You have freedom when you’re easy in your harness.

It couldn’t be called ungentle /But how thoroughly departmental.

The only certain freedom’s in departure.

How many things would you attempt if you knew you could not fail?

I have it in me so much nearer home /To scare myself with my own desert places.

Before I built a wall I’d ask to know /What I was walling in or walling out.

If we couldn’t laugh, we would all go insane.

Happiness makes up in height for what it lacks in length.

All the fun is how you say anything.

The best way out is always through.

I am not a teacher, but an awakener.

How many things have to happen to you before something occurs to you?

Home is the place where, when you have to go there, /They have to take you in.

To be social is to be forgiving.

A jury consists of the twelve persons chosen to decide who has the better lawyer.

Unless you are educated in metaphor, you are not safe to be let loose in the world.

An idea is a feat of association and the height of it is a good metaphor.

The artist in me cries out for design.

The ear is the only writer and the only true reader.

A poem begins as a lump in the throat, a sense of wrong, a homesickness, a lovesickness.

To be a poet is a condition, not a profession.

Poetry is when an emotion has found its thought and the thought has found words.

Every poem is a momentary stay against the confusion of the world.

A poem begins in delight and ends in wisdom.

Writing free verse is like playing tennis with the net down.

Like a piece of ice on a hot stove, the poem must ride on its own melting.

I never started a poem yet whose end I knew. Writing a poem is discovering.

Poetry is what gets lost in translation.