The Wit and Wisdom of GBS 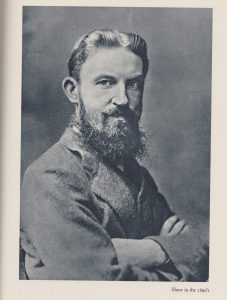 Make it a rule never to give a child a book you would not read yourself.

You see things, you say ‘Why?’ But I dream things that never were; and I say ‘Why not?’

If you want to tell people the truth, make them laugh, otherwise they’ll kill you.

The best way to get your point across is to entertain.

Youth is wasted on the young.

There are two tragedies in life. One is to lose your heart’s desire. The other is to gain it.

There is no love sincerer than the love of food.

Never wrestle with pigs. You both get dirty and the pig likes it.

The biggest problem in communication is the illusion it has taken place.

Patriotism is, fundamentally, a conviction that a particular country is the best in the world because you were born in it.

He knows nothing, and he thinks he knows everything. That points clearly to a political career.

Dancing is a perpendicular expression of a horizontal desire.

Both optimists and pessimists contribute to society. The optimist invents the aeroplane, the pessimist the parachute.

Liberty means responsibility. That is why most men dread it.

When a thing is funny, search it carefully for a hidden truth.

Without art, the crudeness of reality would make the world unbearable.

All great truths start as blasphemies.

I often quote myself. It adds spice to my conversation.

The most tragic thing in the world is a man of genius who is not a man of honour.

Imagination is the beginning of creation. You imagine what you desire, you will what you imagine and, at last, you create what you will.

He who can, does. He who cannot, teaches.

You’ll never have a quiet world till you knock the patriotism out of the human race.

Silence is the most perfect expression of scorn.

Life is no brief candle to me. It is a sort of splendid torch which I have got hold of for the moment, and I want to make it burn as brightly as possible before handing it on to future generations.

Do not do unto others as you would that they should do unto you. Their tastes might not be the same.

As long as I have a want, I have a reason for living. Satisfaction is death.

Happy is the man who can make a living by his hobby.

A gentleman is one who puts more into the world than he takes out.

Democracy is a device that ensures we shall be governed no better than we deserve.

There is always danger for those who are afraid.

The heart of an Irishman is nothing but his imagination.

Take care to get what you like or you will be forced to like what you get.

I don’t know what I think until I write it.

There is only one religion, though a hundred versions of it.

I have my own soul. My own spark of divine fire.

Hell is full of musical amateurs.

A fashion is nothing but an induced epidemic.

Lack of money is the root of all evil.

One man that has a mind and knows it can always beat ten men who haven’t and don’t.

Assassination is the extreme form of censorship.

She had lost the art of conversation, but not, unfortunately, the power of speech.

Most people go to their grave with their music inside them.

He who has never hoped can never despair.

Everything happens to everybody sooner or later if there is time enough.

We are all savages.

Democracy substitutes election by the incompetent many for appointment by the corrupt few.

All professions are conspiracies against the laity.

The perfect love affair is one which is conducted entirely by post.

Patriotism is a pernicious, psychopathic form of idiocy.

That is what all poets do: they talk to themselves out loud; and the world overhears them.

From a very early age, I’ve had to interrupt my education to go to school.

Old men are dangerous; it does not matter to them what is going to happen to the world.

The power of accurate observation is commonly called cynicism by those who don’t have it.

Without good manners and humour, society would be intolerable and impossible.

Alcohol is the anaesthesia by which we endure the operation of life.

If a writer says what he has to say as accurately and effectively as he can, his style will take care of itself.

A soldier always assumes that he is going to shoot, not to be shot.

Common sense is instinct. Enough of it is genius.

The problem with communication is the illusion that it has been accomplished.

I want to be all used up when I die.

The great advantage of a hotel is that it is a refuge from home life.

Those who cannot their minds cannot change anything.

People who say it cannot be done should not interrupt those who are doing it.

The things that most people want to know are usually none of their business.

Perhaps the greatest social service that can be rendered by anybody to the country and to mankind is to bring up a family.

Yesterday is the past, tomorrow is the future, today is a gift—that’s why it’s called the present.