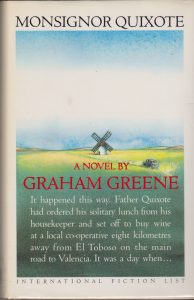 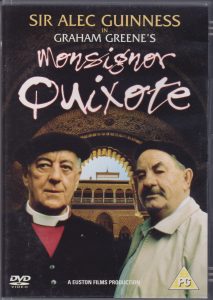 Spent the last few days under the spell of Greene’s book and the faithful adaptation by the 1985 Sir Alec Guinness movie available for free viewing online.

What a treat! A gentle, thoughtful exploration of many topics: faith and doubt, Catholicism and Marxism with a dash of Descartes, authority and rebellion, society and the outsider individual, and spiritual questing in a serious, mock-heroic, humorous way. Both works are probing, entertaining dialectical entertainments. To boot, there is an excellent simultaneous spoof of Cervantes’ original book, plot, and characters.

The adaptation by Christopher Neame, the gentle, playful direction of Rodney Bennett, the outstanding casting including Guinness as Quixote and Leo McKern as Sancho, the wonderful musical soundtrack, and the on-location Spanish settings make this unusual work a mini-masterpieces of sorts. Both works are very impressive and thought-provoking from beginning to end.

Recommended, especially for anyone Catholic or anyone wanting to learn more about the two aforementioned belief systems. One of Guinness’s best films.