Of Mingan and Moore 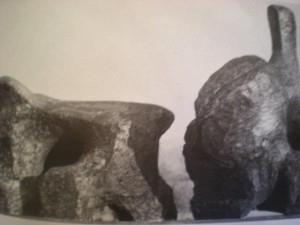 We are changed by what we behold.
Nothing fake about these
limestone giants of Mingan.
The rocky topiary, a granite Rorschach.
Easter Island sentinels
under a starry blue sky.
A hand reaching up
like some mad “Birth of Adam”.
The camel lying on the beach.
An overhang boulder
awaiting the Coyote.
The stone man leaning
over a giant’s hand and foot.
A big-butt figure walking into trees.
The talking head on high.
An old woman’s shoe
with mounted egg beside.
The reptile head leaning
out to sea.
Egyptian heads that
look shoreward.
Eroded muppet faces
protruding from a forest.
No, you will not feel alone here,
only small.
A primitive gallery of
sky, rock, and water.
Pure sculpture in process.
A test of your own largeness.
‘Any questions?’ asks Mingan,
its masses and indirect carvings.

Sculptural sensibility.
Shape and, yes, touch.
The dream of permanence
and eternity that teased Moore–
his maquettes and primitive plasters,
or maybe as he rubbed liniment
on his mother’s broad back–
the lineaments that followed.
Nature and the human body.
Moore: He related to
the sculptural Earth,
its folk and creatures.
“Truth to material”–
an invitation to touch.
His direct carvings of mystery.
The seated, standing,
reclining figures.
The rolling bronze shapes
and marble torsos.
The 3D women–
a tactility of outline.
Moore: Sheep grazing
by his “Sheep piece”.
The A.G.O. tourists leaning
on his outdoor Mingan.

Eternity and process.
The galleries of awe.
Mingan and Moore.

This poem had its genesis back in the ’80s when I first saw the Moore sculpture at the A.G.O. in T.O.  I remember walking about in a daze around the sculptures, occasionally forgetting myself and touching some. If you Google “Images” for Henry Moore sheep, you’ll see some of the pieces I refer to in the poem. Moore had an organic sensibility, like Frank Lloyd Wright, and his outdoor work blends in with country and city (outside the A.G.O., for instance). So what he’s about is shape, texture, and the invitation to touch. He also created grand marvellous female shapes and forms that have a remarkable sensuousness. (BTW/ I have absolutely no doubt that the liniment episode led to the lineament creations.)

Now Moore never likely saw the Mingan Archipelago, but two weeks ago, when I saw the Frame channel’s feature on that place, I immediately thought of him and his work. That primitiveness of the seating, standing, and reclining figures.

The poem is obviously about art and Nature–the processes of direct (man-made; i.e., Moore) and indirect (i.e., Nature). Both artist and Nature carve. Both have left beautiful works that have an air of permanence or Eternity about them, though process is still at work (erosion and time in both cases). They both tease us “out of thought/As does eternity” which takes us back to Keats’ urn and the ‘problems’ of the urn and nightingale poems. The beautiful shapes of Nature and art that stimulate our imaginations and life processes.

In the end, Mingan and Moore are the same, but, simultaneously different or parallel. They are beautiful ‘apples and oranges’, rich creations and expressions–if you will–of something very large, great, and profoundly mysterious–“The galleries of awe”.