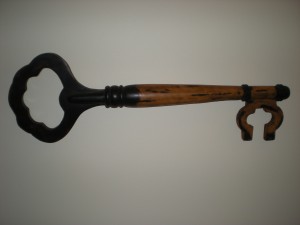 I sought for The Key for many years, and finally found it at Ellerslie Gift and Garden! It now hangs on the wall outside my room so I see it a number of times each day and am reminded of what it represents to me. I will say this much more–The Key is very much a personal experience, sense, or realization of inner fulfillment and completion, with no significant missing pieces. It is also a sense of satisfaction with one’s many significant choices in life, especially at key turning points or moments of opportunity. The Key has to do with knowing oneself quite well and accepting who and what one is, as well as letting go, something I’ve previously alluded to in any mention of Keats’ “Negative capability”. It is also the privilege of having lived and chosen to live in the 10% zone of fuller, ongoing consciousness, self-actualization, and transcendence–a zone not chosen or lived in, to a large extent, by 90% of the population (more concerned with umbilical smartphones, daily survival, limiting frivolity, absurd penny-pinching or mindlessly making money, and being ruled by surface appearances) . Finally, and most importantly, The Key is in the awareness and consciousness that one has been significantly known, understood, wanted, appreciated, and savoured closely by at least one other person and that one has willingly, happily, and completely reciprocated.