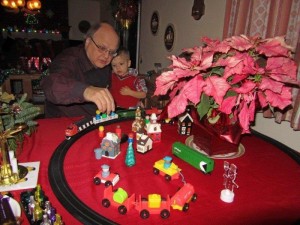 To activate any photos not showing automatically, click on any picture frame. Then click “Continue to this website”–large pic, then smaller pic will emerge. When loaded, double-click upper left-pointing arrow twice to re-enter entire website with all blog photos now displayed. Pictures can then be enlarged or smallened as wished by clicking on photo. Three sizes in total.

It was light outside this time when we got to Ganma and Ganpa’s. Grana had a camera as I walked with giraffe in my arms to him. Mama carried the dog in her Santa dress. Inside the big tree was still there with lights on, but there were no other people, just Ganma and Ganpa.

A piece about consciousness and its early beginnings relative to a special time of year. My grandson also kept walking into the ‘Tree Room’ and looking up at the tree as different-colored lights blinked on and off or ornaments moved. His favorite effect were ye olde bubble lights with the yellow fluid. “Bubbles” he said pretty clearly. There was definitely awe and wonder in many of his responses to what was going on. He also had his share of quiet moments in which I could sit him on my knee or hold him to point out different things. He is quite mimetic with words at this point, and occasionally launches into his own babble syntax to narrate his take on some things like the snowy candle town on an end table, punctuating his description with familiar words like “house’ and “tree” or “quack-quack” for the sound that penguins make!

This Christmas was unique, vicariously sharing in my grandson’s first real, conscious Christmas. ps/An Epiphany baby, he will enjoy his 2nd birthday at home next Saturday with both grandparents in attendance. Should be another slice.