When I Heard the Learn’d Astronomer 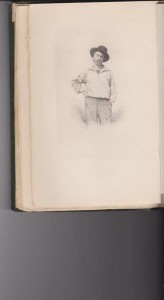 When I heard the learn’d astronomer;
When the proofs, the figures, were ranged in columns before me;
When I was shown the charts and diagrams, to add, divide, and measure them;
When I, sitting, heard the astronomer, where he lectured with much applause in the lecture-room,
How soon, unaccountable, I became tired and sick;
Till rising and gliding out, I wander’d off by myself,
In the mystical moist night-air, and from time to time,
Look’d up in perfect silence at the stars.

I have used Whitman’s original punctuation which mainly differs with the use of several semi-colons. This version is taken from the 1900 edition by Whitman’s publisher David McKay. The alternate 1891-1892 Death-Bed Edition uses commas for the semi-colons and leaves out all inner line commas except for lines 2 and 3. As you can see, these changes create different effects and nuances.