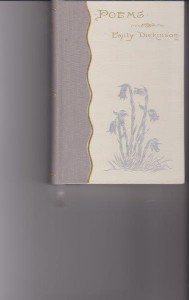 (the 1890 Robert Bros. edition which first published Emily Dickinson’s work, edited by her literary ‘mentor’ Colonel Higginson and the free-spirited Mabel Loomis Todd, who had a long adulterous affair with Emily’s brother Austin)

In 1990, I came to a crossroads in my own life which changed my own position and basic orientation with respect to the rest of society. In terms of personal survival and possibilities for new inner growth and creative expression, it was completely necessary to ‘drop out’. The following poem, from that major life turning point, was my own ‘statement’ of the above ideas.

I choose this island
and its freedom from false face.
I select a landfall apart
from the swell and tides of others.

I claim this lone strand
for the Dominion of Self.
Unattended by minions, I live
without the cant of congregations.

Self-governed, yet worthy
I shun the uncentered
fawners for lost pieces
in the shadows of Other.

I pick my comings and goings,
my music and arts.
I cull first flowers
and pitch the weeds of dependence.

My mind sharpens and sculpts itself
in monuments to glory and love
begging naught of another.

I go it alone, unafraid and unperplexed.
Respectful of this reign,
my hopes people this island.

I harvest the metaphors of life
with a timeless abandon
that knows no thought of Other.