Drums Are My Beat 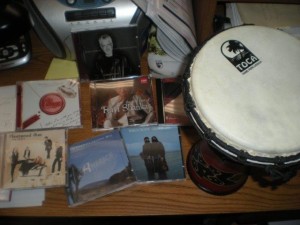 Long overdue. New versatile hand drum (multiple sounds, tones) on right with some of the CDs I first played with/to when I got it. Tocca 7″ synergy-free-style made of Indonesian wood. Works well with anything from folk (Bruce Cockburn, Seals & Crofts) to Eastern sitar (Ravi Shankar) to rock (Chicago, BTO, Fleetwood Mac, Doors) to country (Mavericks).

When I was in grade 9-10, drums were my first choice of instrument, but were too expensive; besides, we lived in an apartment block–it would never have worked. I was interested, then, in rock drums (Sandy Nelson, Ringo Starr) and jazz (Gene Krupa, Buddy Rich). Because the Hootenany era had started, I bought a banjo instead, but quickly changed to guitar in grade10-11, which I have stayed with ever since.

It’s been a lot of fun to come full circle and partially-fulfill this olde desire. I’ve been doing half-hour sessions with various famous musicians since I brought it home. Great sound–a very immersive and pleasantly distracting instrument.