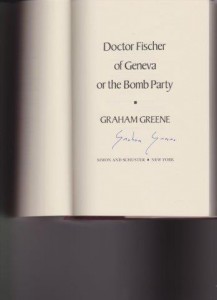 Unexpectedly came across a PBS DVD documentary on this once-popular/favorite U.K. author and viewed it on the weekend. A man constantly on the move who lived into his 80s and had a very full unconventional life after he left his wife and kids. Got entangled with another woman and the spy world, then turned to writing for his tales of escape, loyalty/betrayal, and Catholicism. (He was a bad Catholic, condemned by the League, but friends with Pope Paul of his day! Typical Greene.)

A somewhat nihilistic sort who flirted with Russian roulette when bored, had a long affair (which he wrote about in End of the Affair), and wrote over 50 good, entertaining books. I used to teach Brighton Rock in grade 11, read The Power and the Glory in u, and saw a number of memorable, influential movies based on his books (The Third Man, The Comedians, Travels with My Aunt, Monsignor Quixote, The Heart of the Matter, The Quiet American), bought a beautiful, colorful labor-of-love  Paul Hogarth book illustrating his various books and travels, and picked up a signed Greene along the way so he remains very much in me. There are still two versions of End of the Affair on DVD which I own and still have to see–soon perhaps.

I did not know he had been swindled out of all his fortune and, subsequently had to live out of the U.K. for tax reasons. He had a disdain for American interference in other countries, particularly their assassination approaches, which increased when his friend– the leader of Panama– was also killed by a planted bomb.

Neat guy–highly respected in the U.S.S.R., France, and many other countries. (Feared and spied on by the Americans, though.) Didn’t win the Nobel Prize and turned down many other awards. Very much his own person who (like me) sympathized always with the underdog.

My favorite colour (after blue) still–Greene.