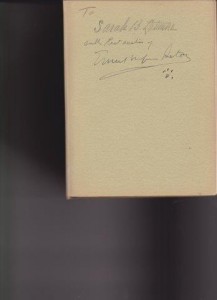 (inscription from the 1898 book discussed below, with the signature pawprint of the author)

If you’re at all like me, you likely find it hard to identify with the primitive violence daily ongoing in other parts of the world, never mind the domestic and public violence closer to home here in North America. Something inside says, “This is incredibly stupid ignorant stuff and totally unnecessary.” Too, there is a strong cynicism about politics and agendas that inevitably lead to the Putin bully-tyrants and national conflicts of the world. The inner voice again says, “This is madness. This is absurd. There is nothing I can practically do to stop this violence and war, be it planned or arbitrary (as in people killing each other, even strangers, on the streets, now more common in Canada).

Violence is a very far-ranging, far-reaching word and concept. We each of us have to face its fact and make choices along the way as the great naturalist-author Ernest Seton-Thompson did at the turn of the previous century in his classic The Trail of the Sandhill Stag, set in the Carberry Hills west of Winnipeg (where I’m from. Even today, deer run wild in that area along the Trans-Canada highway at dark times of the day year-long.)

In the following excerpts from the ending of this animal classic, the young Yan has finally come face-to-face with the great stag he has hunted and sought to kill. What happens to him parallels Seton-Thompson’s own great change in his attitude toward animals and hunting, and why he began his conservationist career.

“At last–at last, his life was in Yan’s hands. The Stag flinched not, but stood and gazed with those great ears and mournful, truthful eyes, and the rifle leaped but sank again, for the Stag stood still and calmly looked him in the eyes….A change came over him, and every thought of murder went from Yan as they gazed into each other’s eyes–and hearts. Yan could not look him in the eyes and take his life, and different thoughts and a wholly different concept of the Stag, coming, coming–long coming–had come.
Oh beautiful creature! One of our wise men has said, the body is the soul made visible; is your spirit then so beautiful–as beautiful as wise? We have long stood as foes, hunter and hunted, but now that is changed and we stand face to face, fellow creatures looking in each other’s eyes, not knowing each other’s speech–but knowing motives and feelings. Now I understand you as I never did before; surely you at least in part understand me. For your life is at least in my power, yet you have no fear….you…I have run down and you boldly seek safety with me. Yes! you are as wise as you are beautiful, for I will never harm a hair of you. We are brothers….if only my strength could always be at hand to save you, you would never come to harm. Go now without fear, to range the piney hills; never more shall I follow your trail with the wild wolf rampant in my heart….I may never see you again. But if only you would come sometimes and look me in the eyes and make me feel as you have done to-day, you would drive the wild beast wholly from my heart, and then the veil would be a little drawn and I should know more of the things that wise men have prayed for knowledge of. And yet I feel it never will be –I have found the Grail. I have learned what Buddha learned. I shall never see you again. Farewell.”

Would that all the people on Earth who hold the wild beast in their hearts learn likewise to let go it as Seton-Thompson did, and stop the killing and wars. Would that others could, similarly realize the potential beauty of others, and the possibility of communication and peaceful communion with others who are different from them. Would that the warring peoples of the planet and those who would do violence unto others, especially the innocents, would have see themselves in their victims and enemies. Would that the violent ones might experience the Grail wisdom and gentle knowledge that Yan finds at the end of Seton-Thompson’s book. Would that we all could become, even briefly, Buddha beings with a sense of the peace that passeth understanding.