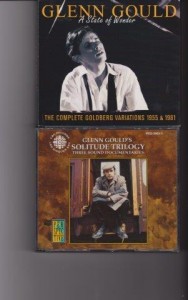 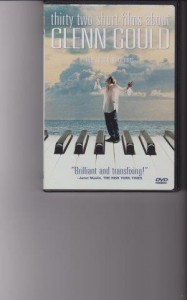 Glenn Gould (died at 50 in1982–32 years ago this past week). The Master Expressionist of Bach. A Veritable Piano Genius.

Gould was fascinated with sound and voice, and that aspect of him is splendidly covered by (bottom left) 3 sound documentaries on 3 CDs–Glenn Gould’s Solitude Trilogy issued by CBC Records.

Also visually recommended, the excellent 10 DVD set of Sony Classical’s Glenn Gould on Television contains the complete CBC broadcasts 1954-1977. It includes “The Anatomy of the Fugue”, The Idea of North documentary, and music by Bach, Beethoven, Richard Strauss, Yehudi Menuhin, Schoenberg, and Mozart.

And next time you are in T.O., you can cuddle next to his wonderfully-sculpted-bench-likeness by Ruth Abernethy on Front St. in front of the C.B.C. building.

Yes, indeed, Glenn is still very much still with us.

Below an oldie of mine based on the Goldberg Variations, called “Variations on Goldberg”.