The Bird and the Butterfly 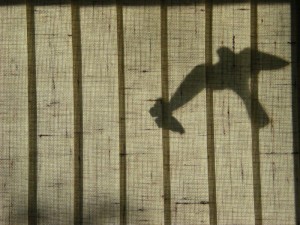 The blinds were closed that Sunday September afternoon. I had closed them for my wife’s father who, otherwise, would have been blinded by the light as we watched the football game on the tube. A familiar context, for sure, and an outing for him, nothing unusual until I looked at the closed blinds.

On them were two strange shadows. The bird shape I knew because of its location–a black bird decal on the outside of the window to ward off the many backyard birds from entering whatever vistas they might be visually tricked into beholding/imagining. The effect of sun and light on large late summer patio windows. The limitations of bird perception combined with the hard presence of man-made objects in merging worlds.

But here in the strangeness of show and surfaces–a butterfly had found the black bird shape and amazingly, on a wingtip, a place to call home for fifteen minutes or so. In that duration, it had found its precise missing piece, completion, or context and made a choice in response to the similarly deceptive,but in a way contrary to how the window decal repelled real birds. Like the birds, though, the butterfly had bought the illusion.

What joined the two shadows, one a flimsy physical item, the other a living presence? The windows are large and there is so much space to choose for a butterfly’s landing. Why the wingtip and not elsewhere? The timing was similarly uncanny with both humans inside witnessing this found art shadow-show. In that moment for two people–a privileged glimpse into the oddities of perception and Nature. In that moment, a vision of absurd connection not possible had the blinds been open, had we not been sitting there at that precise miraculous macro-conjunction of normally separate random worlds.

“To increase consciousness is to increase mobility by metaphor.”–Northrop Frye, “Entry, Notebook 23”

“I think there are all questions and there aren’t any answers.”–Northrop Frye, The Great Teacher