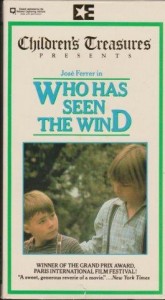 It was inevitable naturally that someone would try to film W.O. Mitchell’s classic novel and, in the 70’s blossoming age of Canadian filmmaking, this was finally done by the experienced Allan King. He used the prairie town of Arcola, SK and Canadian actors fairly effectively to recreate the Saskatchewan of the 30’s Depression. The script by Patricia Watson sticks to the original for its main plots, subplots, and characters. The eccentric characters of Ben, Saint Sammy and Uncle Gerald account for much of the film’s humor with Jose Ferrer leading the way. And other characters such as Brian’s father (Gordon Pinsent), Digby, and Miss Thompson are nicely, accurately realized. The film also does a fine job of rendering tricky book content such as the Berkeley conversations, which no doubt left movie audiences wondering about why that ‘philosophical stuff’ was included. But of that had much to do in the original with Brian’s growing sensitivity and increasing consciousness about reality, and so King, in a nod to Mitchell, retained it.

Where the movie differs from the novel in its lightening of the time and death elements; the atmosphere of the movie is lighter and ‘sunnier’, focusing more on the conventional subtheme of freedom Mitchell also included in the original. Spoiler alert: Not surprisingly, then, the movie ends with the freeing of Young Ben and the caged owl, making for a more upbeat ending. Tonally, the movie occasionally uses conventional crackerjack ‘Tom Sawyer’-style music/comic themes by composer Eldon Rathburn, which again lightens the movie’s mood, purpose and main focus.

Missing are Mitchell’s use of point of view, the sense of alienation, and the more serious themes of time passing and death within Nature. The movie, then, emphasizes parts of the book which were more comic and entertaining rather than serious and thought-provoking (Berkeley’s inclusion aside). The VHS version suggests this is a suitable film for young kids (i.e., Children’s Treasures presents), but it isn’t. It would be of interest to those familiar with the book, to those interested in small town Canadian prairie life of the 1930s, and to grade 9-11 students, specifically, studying the novel and viewing the movie.

(*N.B., Language, though faithful to the book, may be too coarsely ‘blasphemous’ for under 14s in the classroom.)