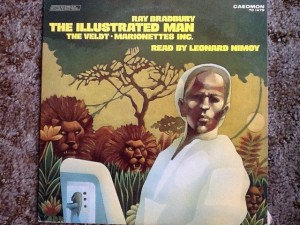 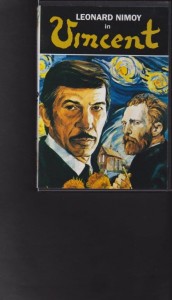 I was never a Nimoy or Star Trek fan, though I used to enjoy a 16 mm film I showed in the classroom several times of him reading and explicating Robert Frost’s “Mending Wall”. He had a very good reading voice also on the Caedmon LP, shown above, recorded in 1976. It was only natural that Nimoy perform some other science-fiction and this he does well, reading two popular Bradbury stories.

Too, I watched for the first time last evening and enjoyed, on DVD (available from Image Entertainment), his 1981 one-man-show Vincent which he directed, wrote, and starred in, playing both Theo and Vincent. Nimoy also includes a visual travelogue and follow-up about what happened after Theo died and his own take on Vincent’s problems. Highly recommended.

There is often more to the picture than the obvious popular iconic image. As Nimoy himself said in his first memoir: he was not Spock, or rather, as I’ve learned, just Spock.