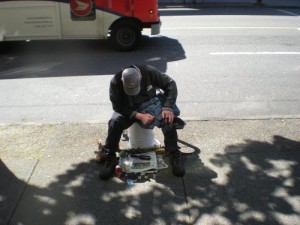 Across from the Banana Republic near an armoured truck, Duane Eddy’s “Rebel Rouser” blaring from the corner Starbuck’s, he sat on a Robson sidewalk awaiting the Second Coming with his tattered New Testament, green porcupine exercise ball, and a selection of hotel body-wash bottles; his newspapers weighted to the pavement by a lint roller and leopard-spotted umbrella. Head-down, he was passed by an endless parade of hand-held screens, tattoos, suits, low-cut blouses, leashed dogs, veiled faces, and sunglassed-mothers with fraps and Winners bags wheeling babies by, their eyes closed to him, too. He only awoke when I dropped a fiver into his empty black food tray, smiled and said “Ya know, I was just dreaming of my mother taking me to school for the first time back in Thunder Bay.”
–April 21. 2015, Vancouver