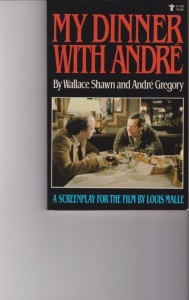 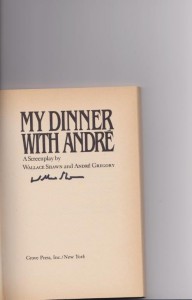 (One of the best film scripts ever, signed)

Ibsen’s play has been adapted by the team that brought you the successful My Dinner with Andre and quirky Vanya on 42nd Street. I will save you a lot of time and recommend those two over this new Criterion release.

One danger with taking oneself too seriously and pushing ego and art for art’s sake, is that things can end up over the top and excessively effusive with little grounding or relevance. This film is too weird, crazy and unfocused despite its offbeat source material; it lacks a convincing central theme and purpose that most audiences can identify with.

Casting himself as the master builder with female love interests is just a little too unbelievable and fake when Wallace Shawn is the protagonist! The opening context of Solness dying in his own house is gratuitous and its artificiality does not ring true in the ending. Jonathan Demme does his best to rein all the exuberance and ‘deep angst’ in, but fails. Only the second (supplements) disc is interesting with an interview with Demme, Gregory, and Shawn about what they were trying to do, and another interview with Shawn and Gregory talking about their work (more interesting), though a lot of both interviews focus on their personalities, differences, and ultimately egos.

In short, My Dinner with Andre unquestionably remains the latters’ masterpiece, but Vanya on 42nd Street is a clever Chekhov adaptation which actually works entertainingly, unlike A Master Builder. One can learn much about life, relationships, and the importance of attitude from those two earlier successful, intriguing movies.