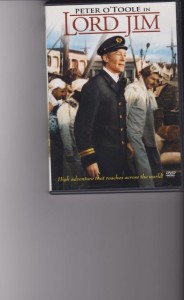 Richard Brooks, director of The Blackboard Jungle and In Cold Blood, always was a director who took chances. In 1965, he decided to film an ‘unfilmable’ Joseph Conrad classic, Lord Jim, in southeast Asia. The original book is likely unreadable now for 90% or more of today’s English-speaking population in North America. It is typical Conrad–very much a modern, psychological novel, concerned with inner mind-spirit workings of a unique protagonist. As with other of his ‘mystery men’, Conrad’s main concern is exploring, endlessly, what makes Jim tick and make the existential choices he does.

As such plot is about the furthest thing from Conrad’s mind. Only character, psychology, and atmosphere truly matter. Conrad is the first major 20th century English novelist of consciousness, predating Joyce, for example. Brooks successfully extracts the story, plot, and other conflicts and characters that are ‘hidden’ in the original book, and gives the viewer a visual interpretation of the complexities of Jim in fairly understandable, credible way. There are no false notes in Brooks’ faithful adaptation.

The talented Peter O’Toole is perfectly cast as a thoughtful eccentric, much as he is in Lawrence of Arabia, and this choice works well. It is hard to imagine who else might have played the role as strangely, memorably, and wilfully. Brooks’ script makes the same essential points that Conrad had made about guilt, the search for redemption, and the honorable death of the protagonist. The viewer feels the strand of fate or destiny running through the film right through to the ending.

James Mason, Eli Wallach, and especially Curt Jurgens all make effective villains. Jurgens gives a memorable performance of a desperately greedy, egotistical hanger-on parasitically attached to both Wallach and Mason. Daliah Lavi makes a plausible, enigmatic love-interest for Jim once he gets to the tin plantation.

The look of the film is realistic for both the film and book time periods. The action scenes are the very sort of thing missing from Conrad’s original that readers and viewers alike both expect. These plausibly contribute to both of Jim’s inner and external conflicts. No film could ever duplicate the inner workings and depths of psychology embedded in the original novel, but Brooks boldly and successfully catches the core of this Conrad classic. Jim is the archetype of today’s deeply-conflicted man who tries to retain his integrity and stay true to himself. Highly recommended for purchase or rental by those viewers interested in truly unconventional characters and classic movies no longer made today.