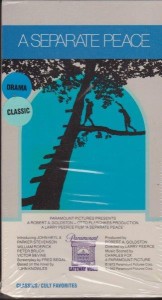 We have all done things we’ve regretted and made serious mistakes that have left a pervasive feeling of conscious and subconscious guilt. It is that experience which anchored John Knowles’ best-selling novel A Separate Peace. Director Larry Preece uses atmosphere and many pauses to bring this novel to the screen. About half the film shows characters outside in all seasons, but particularly in winter which supports the tragedy of this storyline about betrayal between two school-friends. Finny, a charismatic, but crazy extrovert, is crippled in a fall from a tree which was triggered by an irrational movement by his introverted, acolyte-friend Gene. The setting is World War II at a boys’ academy with many of the students about to graduate and enter the larger, uglier classroom of war so there is a microcosmic-macrocosmic level to the plot.

John Heyl is strong as the perpetually-kidding Finny and Parker Stevenson is the odd-looking Gene who successfully gives a non-stop performance of self-doubt and uncertainty, swept along by forces larger than the two of them. In many ways, the plot is simple and plain and those viewers looking for deeper meanings will be disappointed. But the film does convey the central idea and fact of how one small choice can change one’s entire life and relationships with those closest to one. I’m recommending  A Separate Peace on the basis of its significant and relevant truths.